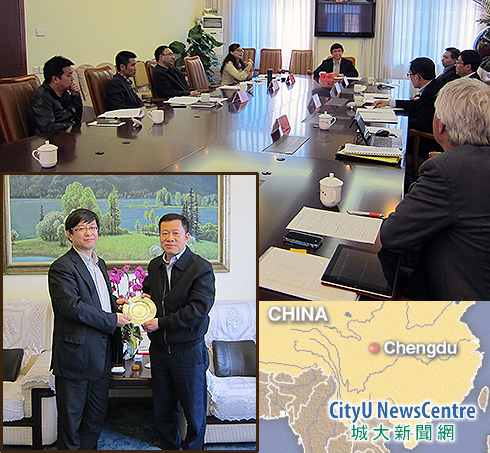 A City University of Hong Kong (CityU) delegation led by Professor Lu Jian, Vice-President (Research and Technology) and Dean of Graduate Studies, participated in the first meeting of the Board of Directors of the CityU Chengdu Research Institute (CityUCRI) in Shuangliu County in Chengdu from 22 to 23 March.
Mr Zhou Xianyi, County Mayor of the Shuangliu government, reaffirmed the government’s support of this project. He reported that the layout plan of the CityUCRI building had been approved and the main sections were expected to be completed by April 2015.
Professor Lu said that CityUCRI was the University’s second strategic platform in mainland China for research and development, incubation and innovation, and professional education and training. He added that CityUCRI would enhance the social and economic status of Shuangliu, as well as serve as a platform for CityU faculties to transfer their knowledge into practical use.
The Board of Directors comprises four representatives from CityU, including Professor Lu, Mr Sunny Lee Wai-kwong, Vice-President (Administration), Professor Xue Quan, Associate Vice-President (Innovation Advancement and China Office) and Mr Simon Tang Siu-kee, Director of Finance, as well as three representatives from the Shuangliu County.
A framework for CityUCRI such as its constitution, business model and organisation chart, was finalised in the meeting.
CityU and the Shuangliu government signed a collaborative agreement on 5 August 2013 for the establishment of CityUCRI. It is anticipated that one to two research centres or platforms will be set up during the initial stage of operation.