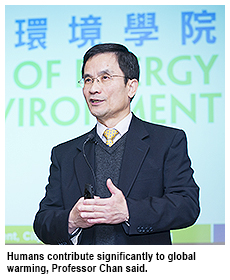 Global warming is enhanced by human activities and we must do everything we can to slow it down.
That was the stark conclusion presented in a timely lecture by Professor Johnny Chan Chung-leung, Dean of School of Energy and Environment, which took place on 11 March under the auspices of the President’s Lecture Series: Excellence in Academia.
Professor Chan offered two thought-provoking analogies to clarify the message about the role humans play in global warming during his talk, which was titled “Global Warming: Natural or Human-induced?”
If a man died of a heart attack after smoking for 45 years, Professor Chan said, doctors could not say with absolute certainty that the cigarettes induced the fatal cardiac arrest, but it was highly likely that they did. In other words, the odds are high that the nicotine habit weakened the smoker’s health system.
Similarly, Professor Chan said, if the weather forecast predicts an 80% probability of precipitation for the weekend, it might be risky to go ahead with that BBQ party. You would be wise to arrange for an alternative indoor venue, or buy large umbrellas.
Essentially, the debate about the causes of global warming culminates in odds, probabilities and perceived certainties. Many complex interacting factors contribute to the possible causes of global warming, and these can be broadly categorised into the natural and the anthropogenic, Professor Chan said.
The natural factors impinging on our climate include areas covered by the Milankovitch Theory, Professor Chan said, a set of ideas positing that variations in the Earth’s orbit determine climatic pattern.
An example of this theory is the eccentricity of the Earth’s orbit, i.e. the measure of 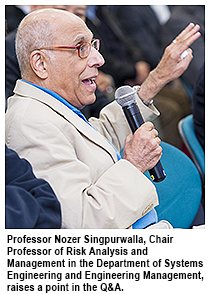 the departure from circularity that the Earth makes upon its elliptical journey around the Sun, as well as the angle of the Earth’s axial tilt towards the Sun during this more-or-less year-long traverse through space.
In addition, Professor Chan argued, the large amounts of greenhouse aerosols that are shot into the atmosphere following significant volcanic eruptions affect how the Earth cools and warms up by trapping in and deflecting heat.
The problem for scientists is that anthropogenic pollution such as emissions from vehicles using fossil fuels, for example, acts on the Earth’s atmosphere in much the same way as volcanic activity, i.e. through the release of aerosol gases that trap and deflect heat. In other words, our polluting activities are daily volcanic eruptions.
We are thus resigned to the same situation as doctors diagnosing the cause of the heart disease of the life-long smoker: was it the cigarettes or a composite of genetic and environmental factors that killed the man?
What was clear according to Professor Chan, though, is that a direct link between human activity, i.e. burning fossil fuels, producing artificial gases that deplete the ozone layer, and deforestation, and climate change is highly likely since natural factors such as orbital variations and changes in solar activity following major volcanic disturbances are not likely to account for long-term changes in the climate.
For example, he showed that anomalies in the Earth’s temperature had a stronger historical correlation with human activity than with natural factors. Models for estimating climate based on reconstructions of past temperatures indicated that climate change was unlikely to be entirely due to natural factors, Professor Chan said.
To demonstrate the urgency of the need to curb activities that might affect our climate, Professor Chan revealed what would happen over the next 3,000 years if models predicating changes in seas levels due to the loss of the polar ice caps proved accurate. The map for the year circa 5014 predicts that Hong Kong will be entirely underwater as would significant chunks of mainland China.
So while it might be challenging to say with certainty that contemporary episodes of unusual weather, i.e. the recent bouts of record-breaking snowfall in the US or rainfall in England, two examples among many, are directly attributable to human-induced climate change, it is highly likely that unabated anthropogenic activities will increase the occurrence of extreme weather in the future.
When asked what can be done to mitigate the impact of anthropogenic activities on the Earth’s climate, Professor Chan said governments around the world needed the political will to legislate against increased levels of pollution, citing examples from the UK and South Korea of governments enacting laws that will help to reduce emissions.
Other governments could, and should, do more, he said.
Professor Chan is a world expert in the area of climate studies. He is Chair Professor of Atmospheric Science and the Director of the Guy Carpenter Asia-Pacific Climate Impact Centre at CityU; a Fellow of the American Meteorological Society; and a Member of the Tropical Meteorology Research Working Group of the World Meteorological Organisation and Chair of its Tropical Cyclone Panel.
In addition to being a recipient of the International Journal of Climatology Award of the Royal Meteorological Society, he was conferred the title of Distinguished Meteorologist by the Hong Kong Observatory.