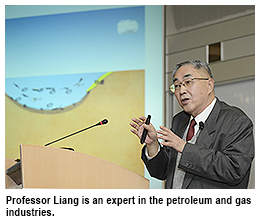 One of mainland China’s leading petroleum and natural gas experts offered historical and practical perspectives on the development and prospects of these energy-related industries during his talk at the latest City University Distinguished Lecture, held on 5 March.

Professor Liang Di-gang is the current Deputy Director of the Research Institute of Petroleum Exploration and Development, the R&D wing of the China National Petroleum Corporation and PetroChina Company Limited, which focuses on strategic development for global upstream business, fundamental applied theories and techniques, and technical support for the company’s oil and gas projects around the world.
In his talk, titled “Development and Prospects of Petroleum and Natural Gas in China”, Professor Liang drew on his extensive geotechnical engineering experience exploiting the basics of soil and rock mechanics to establish new gas and oil fields and to estimate the capacity of existing reserves.
Using a vast array of statistics and in-depth assessment of the current state of oil and gas production and consumption in mainland China in comparison with other nations in the region and globally, Professor Liang attempted to answer a perennial global question: how can we improve our energy situation? He concluded that the first years of the twenty-first century would see natural gas overtake oil in terms of production and consumption.
“The global era for oil will come to an end and gas production will peak, filling the energy gap,” he concluded.
The use of natural gas, in Professor’s Liang’s opinion, offered China and the rest of the world a solution to our current energy needs since it was cleaner and the planet still possessed vast reserves. 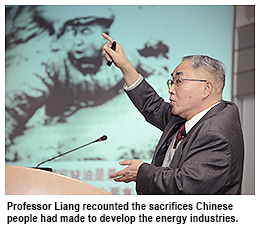 He used the recent discovery of a huge natural gas reserve in southwest China’s Sichuan basin to emphasise that fresh gas reserves were available. That gas field alone is thought to contain more than 300 billion cubic meters of technically recoverable gas reserves, according to official sources.
“New discoveries are on the horizon,” said Professor Liang, who was born in Hong Kong and moved to Beijing when he was a teenager.
Currently, Professor Liang suggested, China was too reliant on coal, using it for 60% of its energy needs when in comparison the US used 20%. However, natural gas, which as Professor Liang emphasised was much less harmful to the environment than burning coal, accounted for only 4.7% of China’s energy demands, whereas the aggregate figure for the rest of the world was about 20%.
Reliance on oil is also problematic, Professor Liang suggested, for environmental and economic reasons. He said Beijing could learn a great deal from Hong Kong’s decision to switch taxis to the use of liquid petroleum gas in terms of impact on air quality, and he pointed out that even though China ranked in the top five of the world’s biggest crude oil producers, it was second in the world after the US in terms of the amount of oil imported.
While gas was not a panacea for China’s energy needs, it offered a silver lining, Professor Liang proposed. “Our natural gas production kicked into high growth in the last 10 years after remaining sluggish compared to oil production,” he said, arguing that whereas we are still witnessing the peak of oil production world-wide, gas production would peak in China in a few decades’ time.
The energy debate, Professor Liang said, had to include the question of nuclear energy, and he said he was keen to read the recent book on the future of the nuclear energy industry authored by Professor Way Kuo, University President, who gave the welcoming remarks at the start of the lecture.
But Professor Liang stated that his years of geotechnical engineering experience in the petroleum and gas industries had left him upbeat about the future of gas as a major, if not the most important, feature of the future energy mix.