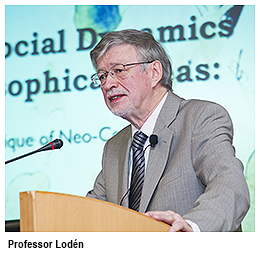 One of the world’s leading scholars on Chinese intellectual history led the audience back to eighteenth-century China to explore a well-known critique of Neo-Confucianism proposed by the eminent polymath Dai Zhen (1724–1777) at a City University Distinguished Lecture on 23 January.

Professor Torbjörn Lodén, a Visiting Professor at City University of Hong Kong (CityU) since 2011, is currently Professor of Chinese Language and Culture at Stockholm University and Director of the Stockholm Confucius Institute and a member of the Royal Swedish Academy of Letters, History and Antiquities.
In the mid-eighteenth century, Professor Lodén said, Dai Zhen reconceptualised the Neo-Confucian (lixue 理學) orthodoxy of the day as formulated by the philosopher Zhu Xi (1130–1200), a mode of thinking on which the civil service examinations were based from 1313 onwards.
But according to Dai Zhen’s critique, mapped out in 13 publications, lixue was oppressive and had disastrous effects for many people, Professor Lodén explained. Dai Zhen believed lixue misrepresented the ideas of the Confucian classics, turning li – principle – into a subjective entity, so that anyone with authority could claim that his subjective opinions (yijian 意見) were li.
Essentially, Dai Zhen was accusing those thinkers who went before him of misconstruing the meaning of the Confucian classics, which was allowing the elites in government to “kill people”.
The central argument revolves around Zhu Xi’s conceptualising of desires and feelings as obstacles to moral agency, with Dai Zhen writing against this orthodox view that eliminating desires and intrusive emotions was good for you, Professor Lodén was suggesting.
However, Professor Lodén questioned the strength of Dai Zhen’s critique. He argued that while lixue certainly legitimised oppression, the orthodox ideas themselves were not oppressive. Rather, it was the way a government utilised the ideas for its own purposes that was tyrannical. 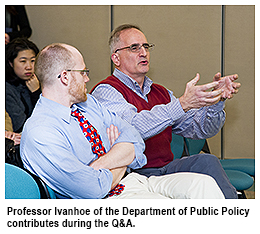 In addition, Professor Lodén said that Dai Zhen might have misinterpreted Zhu Xi’s writings about desires, with the latter actually arguing that selfish desires were bad but not necessarily the actual desires.
Professor Lodén broadened the debate to bring in recent European history, presenting parallels between the way neo-Confucianism might have been used to legitimise oppression and the manner in which some proponents of communism and Nazism may have drawn on certain nineteenth century European philosophers such as Marx and Hegel.
He concluded that ideas and philosophical orientations do not by themselves exert direct influence on society.
“[But] they may exert indirect influence by means of people who interpret them and act on the basis of these interpretations or by individuals who find it handy to legitimise their acts with reference to these ideas,” he said.
This led him to further argue that “basic philosophical orientations such as monism, dualism, objectivism, subjectivism may be used, without necessarily being misinterpreted, for contradictory political purposes, and in this sense they are politically indeterminate”. That is, the same philosophical position can be used for good or bad depending on who is in power, how that power is employed, at what time and under what circumstances.
His final point was that, seen in the perspective of the history of Chinese thought, Dai Zhen’s critique of Neo-Confucianism and his interpretation of Confucianism was a “significant step away from an authoritarian mode of thought in the direction of a more independent intellectual stance which makes people as individuals responsible for their ideas”.