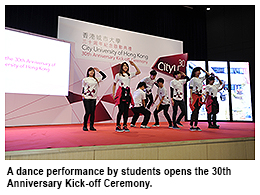 Sir Gordon said CityU’s development had been striking. State-of-the art equipment had been installed in the brand new buildings, and CityU could boast an intricate connection of global linkages, from the research hubs in the mainland to the academic partners in overseas universities, he said. 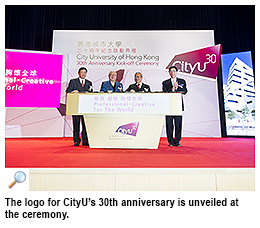 “Today you will hear a mix of different languages and witness a diverse range of cultures on campus, reflecting the internationalisation of the University, and we experience daily the technological wonders that are making campus operations more environmentally friendly,” he added.

In his opening remarks, Dr Leung talked about the diverse anniversary programmes scheduled for this year.

“2014 is a wonderful opportunity for the entire CityU community to come together to celebrate the University’s achievements,” he said.

Dr Leung also introduced the specially designed 30th anniversary logo, which was unveiled during the birthday celebrations. “This new design embodies the energy and spirit of the University with an unconventional shape that reflects CityU’s dynamism, ascending status and forward-looking features,” he said.

Mr Hu congratulated the faculty and students for all that they had achieved over the years. “The driving force for our success has been our faculty, staff and students. Their hard work and loyalty to the University have ensured that we can compete with the best universities in the world in terms of professional education and problem-driven research,” he said.

Professor Kuo extended his thanks to everyone who had contributed to the organising of these events, in particular to Dr Leung, who chaired the organisation committee with enthusiasm and wisdom; Mr Hu, who has provided leadership and guidance; as well as faculty and staff, students and alumni who have supported CityU all these years. 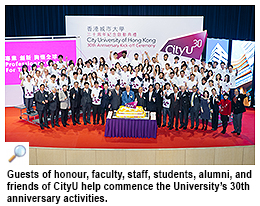 The President also took the opportunity to thank the people of Hong Kong for trusting CityU with the education of the young people of the city. “Their unstinting belief in us has been a tremendous boon. We relish the fact that they have put their faith in our ability to raise education standards, produce high-quality professionals for the workforce, and develop research that has a direct benefit for the future of society.”

A series of activities and events are scheduled for the whole year. In addition to the 30th Anniversary Kick-off Ceremony, the university will have the 30th Anniversary Dinner and Homecoming Gala 2014, as well as arts and cultural, student, alumni programmes and distinguished lectures and international conferences.

In addition, distinguished international and CityU academic leaders will address sustainability challenges in Hong Kong and the East Asia region at the Sustainability Summit in October.