Lecture Theatre 16 in Academic 1 (AC1) at City University of Hong Kong (CityU) was named after Mr Benjamin Kwok Chan-yiu, a CityU alumnus, at a naming ceremony on 8 January in recognition of Mr Kwok’s generous support for the University and his contributions to society. 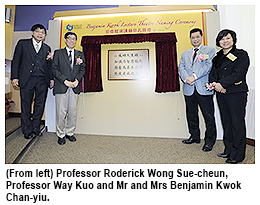 Mr Kwok is the Managing Director of Kwonnie Electrical Products Limited. Committed to strengthening the competitiveness of the local electrical manufacturing industry, he currently serves as President Honoris Causa of the Hong Kong Young Industrialists Council, the Honorary President of the Hong Kong Electrical Appliance Industries Association, the Secretary General of the Hong Kong Young Industrialists Council Foundation, and a member of the Small and Medium Enterprises Committee of the Trade and Industry Department of the HKSAR Government. His enthusiasm for public service underscores his commitment to the well-being of society.
Over the years, Mr Kwok has made several generous donations to support the University’s research activities. He has also set up an internship scholarship to sponsor many science and engineering students to work as interns in industry. To nurture a new generation of science and engineering professionals, he encourages students to boost their competitiveness by gaining more work experience.
As an honorary member of the CityU Alumni Giving Club and an honorary adviser to the CityU Postgraduate Association, Mr Kwok enthusiastically supports university education and CityU’s development. In addition, he has made generous donations to help the underprivileged in society and the victims of natural disasters. He also serves as a member of the Rehabilitation Advisory Committee at the Labour and Welfare Bureau of the HKSAR Government and performs other public services.
The naming ceremony was officiated by Mr Kwok, Professor Way Kuo, CityU President, and Professor Roderick Wong Sue-cheun, Vice-President (Development and External Relations). 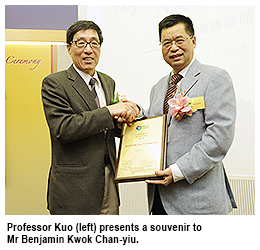 In his welcoming address, Professor Kuo thanked Mr Kwok for his support. “As a distinguished entrepreneur, Mr Kwok received the Young Industrialist Award of Hong Kong from the Federation of Hong Kong Industries in 1997 as an appreciation of his significant contributions to society and the local electrical industry. After earning his Master of Business Administration (Executive) degree from CityU in 2007, Mr Kwok has actively taken part in alumni activities. He is a founding member of CityU’s Eminence Society. Alumni are an important element of CityU and we are honoured to have many distinguished alumni,” Professor Kuo said.
Mr Kwok emphasised the importance of education and he pointed out that CityU has made substantial contributions to society by producing many professionals. “As a member of CityU, I am glad to have the chance to contribute to my alma mater and help young fellow students pursue excellence by acquiring professional knowledge in a well-equipped campus. I hope more alumni and successful leaders in society can take concrete actions to contribute and support the development of CityU to nurture more talent for the future,” he said.
The Benjamin Kwok Lecture Theatre, located on the 4/F of AC1 at CityU, has an area of about 160 square meters that can accommodate 120 people. With a sophisticated multimedia audio-visual system, the theatre can be used for lectures, seminars and international conferences.