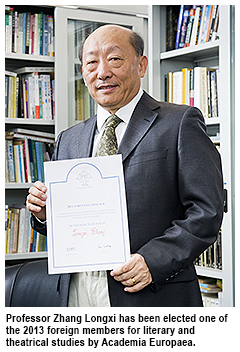 Professor Zhang Longxi, Chair Professor of Comparative Literature and Translation in the Department of Translation, Chinese and Linguistics at City University of Hong Kong (CityU), has been elected one of the 2013 foreign members for literary and theatrical studies by Academia Europaea.

A foreign member of the Royal Swedish Academy of Letters, History and Antiquities since 2009, Professor Zhang is highly regarded by the international academic sector for his research in the humanities and cross-cultural studies.

His major publications include Allegoresis (2005) and Unexpected Affinities (2007). The former was commended by the academic sector as “one of the best works on comparative poetry and literary analysis between the East and the West” and “a ground-breaking work that contributes substantially to our understanding of literary texts East/West”.

Academia Europaea and the Royal Swedish Academy are both institutions of importance. “The Royal Swedish Academy has enjoyed a high reputation since its establishment in the 18th century. Although Academia Europaea is relatively a much younger organisation, it represents not only one country but the whole of Europe. Also, its members are the most influential scholars in the world. So I was very pleased knowing I had been elected,” Professor Zhang said.

Academia Europaea was jointly established by the Royal Society (UK) and many other official academies in Europe in 1988, encompassing 20 academic disciplines such as the humanities, social sciences and natural science.

Among the total 262 members elected by Academia Europaea in 2013, 15 are foreign members. In addition to Professor Zhang, another Chinese scholar conferred membership was Professor Wang Ning of Tsinghua University.

Dedicated to the study of Eastern and Western cultures, Professor Zhang strives to promote the development of diverse world cultures by enhancing our understanding. 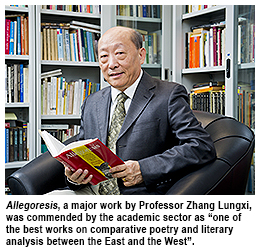 “Many scholars like to stress the uniqueness of their own cultures,” he said. “However, it’s a rather wrong concept. For example, some people hold that Chinese culture is unique in advocating a harmonious integration between nature and humans. In reality, the West also talks about the relationship between humans and nature, which has given rise to the promotion of environmental protection in recent years. Hence, to have a real understanding of a different culture, we should not merely learn its language but also its politics, philosophy and religion. This cross-cultural understanding can advance the exchange and integration of different cultures, and promote peace in the world.”

Professor Zhang, who joined CityU 15 years ago, regards Hong Kong as an ideal place for studying Eastern and Western cultures. He suggested that Hong Kong students read extensively and learn beyond the scope of their own disciplines.

“Cross-cultural study does not offer concrete skills, which appears to be impractical. Yet it cultivates critical thinking and analytical skills that enhance the quality of a person and contributes significantly to the advancement of society,” he said.

“Hong Kong has many distinguished humanities scholars and is not a ‘cultural desert’”, Professor Zhang said, rebutting criticisms of Hong Kong’s cultural roots, but he added that Hong Kong should boost the cultural quality of its citizens in order to be compared to cities such as London, New York or Paris.