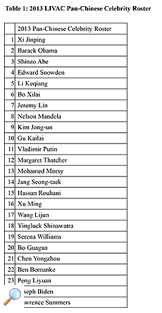 The 2013 LIVAC Pan-Chinese Celebrity Roster was released on 2 January 2014 by the Department of Chinese, Translation and Linguistics of City University of Hong Kong (CityU), and sees political issues dominating media coverage in Beijing, Taipei and Hong Kong.

“The 2013 LIVAC Roster lists a total of 25 celebrities, two more than the roster for 2012, and focuses on emerging or senior political figures in mainland China, the US, Japan, Taiwan and South Africa. The most notable figures are former Party Secretary of Chongqing Bo Xilai, now a convicted prisoner, and his two family members. If his two associates, Wang Lijun and Xu Ming, are included, five people related to this case appear on the 2013 Roster and account for an unusual 20% of the total. Shinzo Abe is now ranked in the top three as a result of the increasing tension between mainland China and Japan,” said Professor Benjamin Tsou, Professor Emeritus of the Department of Chinese, Translation and Linguistics of CityU.

The Annual Pan-Chinese Celebrity Roster details the rankings in terms of total media exposure of personalities in Beijing, Hong Kong and Taipei. The results are based on the accumulative statistics from the bi-weekly rosters compiled and published throughout 2013.

The appearance of Edward Snowden, a contract employee at the US National Security Agency, and Chen Yongzhou, a former newspaper journalist in China, on the 2013 Roster highlights media concerns over the freedom of the press. Jeremy Lin, the American Chinese basketball sensation, and Serena Williams, the well-known American tennis player, represent the sports sector on the Roster. A total of five women — Gu Kailai, wife of Bo Xilai, Margaret Thatcher, former prime minister of the United Kingdom, Yingluck Shinawatra, prime minister of Thailand, Serena Williams, and Peng Liyuan, wife of Xi Jinping — appear on the Roster, accounting for a ground-breaking 25% of the total.

It is worth noting that 2013 saw China's first couple in almost 100 years making a joint appearance in the international arena. 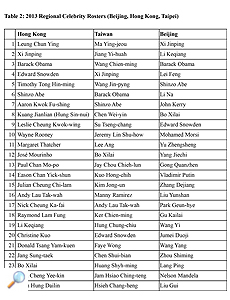 In the Regional Celebrity Roster of Hong Kong, former ICAC Chief Timothy Tong appears in fifth place, replacing Rafael Hui Si Yan from the roster of 2012 in matters relating to corruption scandals. The alleged corruption case against Tong has raised Hong Kong’s concern about the ICAC. Meanwhile, the 2013 Roster reveals that Hong Xiannu, the Cantonese opera diva, and Leslie Cheung, the late famous performer, are well remembered by Hong Kong people. Among the popular entertainment figures who enter the list, Aaron Kwok is ranked higher than Andy Lau and Eason Chan.

Five of the seven new Politburo Standing Committee members enter the Beijing Roster this year, while Li Na, the female tennis player, is ranked in 6th place ahead of most of the celebrities on the Roster.

Launched by CityU in 1995, the LIVAC (www.LIVAC.org) synchronous corpus regularly and concurrently filters and analyses newspaper data in major Chinese communities on a rigorous basis. More than 500 million characters of news media text have been processed and analysed, building an expanding Pan-Chinese dictionary of 1.6 million words. The LIVAC Pan-Chinese Celebrity Roster was launched in 2000.