​A leading magazine in the field of IT security has named a security information and event management (SIEM) system developed at City University of Hong Kong (CityU) as one of the world’s top 40 IT security projects for 2014.
CSO Magazine named CityU as a winner in the highly competitive CSO40 awards with a panel of judges consisting of global experts from the IT security industry. An awards ceremony will be held in March 2014 in Georgia, US. 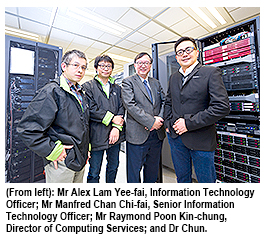 “We are extremely pleased that the University is being recognised by our peers in the information security field as one of the leading organisations in the use of technology for IT security,” said Dr Andy Chun Hon-wai, CityU’s Chief Information Officer.
“CityU is currently the first university in Hong Kong to have fully implemented a modern SIEM system that protects us against newer, more sophisticated methods of cyber-attack,” he added.
CityU’s SIEM system continuously monitors and detects any potential modern attacks, such as advanced persistent threats and insider threats. In the past six months, the system has helped identify and resolve several major security incidents and prevented reputation, personal data, and digital asset losses.
The monthly US magazine, which has a circulation of 27,000 in over 50 countries, provides security decision makers around the world with high-level information, best practices and strategic insights, helping to balance safety with the pursuit of business opportunity.
The CSO40 Awards recognise security projects and initiatives that demonstrate outstanding business value and thought leadership. Each year only 40 organisations are selected for the awards.
“The list of 2013 winners contains some of the largest companies in the world, including Coca-Cola, FedEx, Intel, PayPal, Procter & Gamble, and Sharp, and so forth, while the 2014 winners include the US Homeland Security, Cisco, Boeing, and others,” Dr Chun said. “Each year only 40 organisations are selected, and so it is highly competitive. CityU is the first University in Asia to receive this award.”