​City University of Hong Kong (CityU) will be hosting the City Literary Festival 2014 next year, along with the 9th City Literary Award competition, to encourage aspiring young writers. Entries are invited, on the theme of “City Living”, from now till end January 2014. 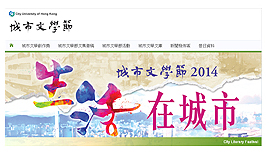 Essentially, the City Literary Award is designed to spark young people’s interest in literature, and encourage the youth of Hong Kong and Macau to take up creative writing in Chinese, said Professor Cheng Pei-Kai, co-organiser of the event and member of CityU’s Culture and Sports Committee.
About the theme for the 9th competition, Professor Cheng explained that young people living in both metropolises must have had certain experiences, feelings, emotions and thoughts that they would like to recount, depict, express and reflect upon for others, and it is the organisers’ intention to inspire them to put all this forth in some literary form.
Dedicated to promoting humanistic concerns and literary activities, CityU has hosted the City Literary Festival along with the City Literary Award competition for eight years. These events are proved popular among the youth in Hong Kong and Macau and have support from the educational and cultural sectors in both places.
As in past years, the competition in 2014 is open in four categories, namely the essay, short story, poetry, and art and cultural criticism. Entrants are free to choose one category and write under their own titles so long as the subjects fit in with the given theme. Their writings can be fictional or non-fictional. The top three winning entries in each category will be awarded cash prizes of $5,000, $3,000 and $1,000 respectively, while outstanding entrants will be honoured with merit awards.
The 9th City Literary Award has once again received generous support from prominent writers, poets and literary scholars. Some of them will form the panel of judges. They are: Professor Huang Ziping, Professor Chen Zishan, Mr Liu Wai-tong, Mr Li Rui, Ms Lily Hsueh, Mr Yan Lianke, Professor Bei Dao, Mr Yip Fai, Professor Cheng Chou-yu, Mr Perry Lam, Professor Xu Zidong, and Professor Ji Jin.
Those aged from 15 to 24 inclusive, as well as students in tertiary institutions (no age limits), who are living, working or studying in Hong Kong and Macau are eligible to send in their entries no later than Thursday, 30 January 2014. The results will be announced in May 2014.
The festival and the award competition are organised by CityU’s Cultural and Sports Committee, the Chinese Civilisation Centre, and the Department of Chinese, Translation and Linguistics; jointly organised by the Hong Kong Arts Development Council, the Chinese Language Education Section of the Curriculum Development Institute at the Education Bureau, and the Macao Foundation.
For details of the City Literary Festival 2014 and the City Literary Award, please visit www.cityu.edu.hk/ctspc/literature or call 3442 8029 .