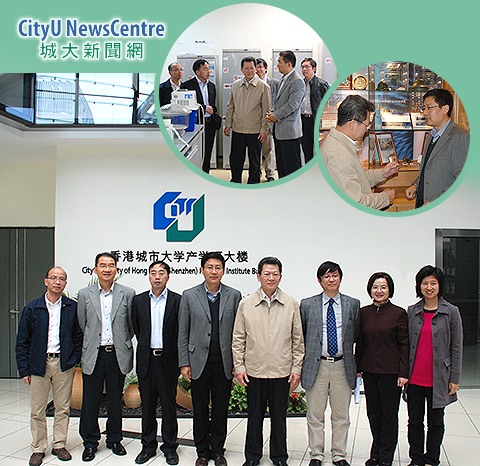 A delegation led by Mr Chen Biao, Deputy Mayor of the Shenzhen Municipal People’s Government, discussed ways to facilitate research collaborations during a visit to the CityU Shenzhen Research Institute (CityUSRI) on 13 December.
The delegation of 12 Shenzhen officials, including Mr Lu Jian and Ms Qiu Xuan, Director-General and Deputy Director-General of the Science Technology and Innovation Committee of Shenzhen Municipality, was warmly welcomed by Professor Lu Jian, Vice-President (Research and Technology) and Dean of Graduate Studies of CityU.
Professor Lu highlighted the mission and vision of the CityUSRI at the Centre for Advanced Structural Materials, for which he acts as the director and where several large mainland research projects are underway.
In addition, Professor Stephen Liao Shaoyi, Director of the Advanced Intelligent Information Systems Research Centre, Professor Michael Yang Mengsu, Director of the Biotechnology and Health Centre, and Professor Xue Quan, Director of the Information and Communication Technology Centre, presented the latest research undertaken at their respective centres and their research output that has been transferred into practical use.
The delegates reported that they were impressed by the developments made by CityUSRI in such a short period and reaffirmed that continuous exchanges in innovation and technology between Hong Kong and Shenzhen would certainly benefit the advancement of society on both sides.