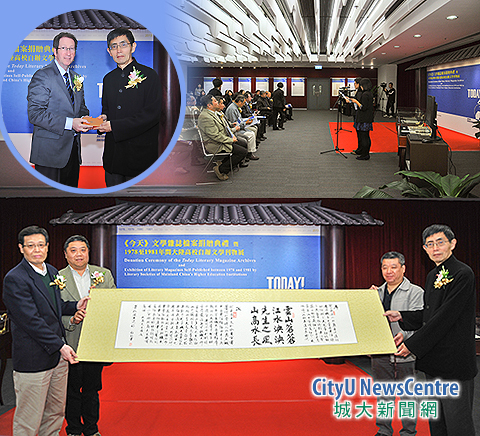 Literary material from the archives of a highly respected literary magazine from the mainland has been donated to the Run Run Shaw Library of City University of Hong Kong (CityU).

The gift has not only expanded the Library’s collections, it has provided an important source of research for modern Chinese poetry.

To mark the occasion, a ceremony was held on 4 December at which a souvenir was presented to Professor Bei by Professor Arthur Ellis, Provost of CityU, Professor Zang Xiaowei, Dean of College of Liberal Arts and Social Science, and Professor Steve Ching Hsiang-hoo, University Librarian.

At the ceremony, Professor Ching said the Library had spent two years digitising most of the materials, which are now available online.

The Today Literary Magazine was founded by the “misty poets” Professor Bei and Mr Mang Ke in the late 1970s. Professor Bei, whose works have been translated into 30 languages, has been considered as a candidate for the Nobel Prize for Literature.

In addition to the donation, an exhibition featuring literary magazines that were self-published by higher education institutions on the mainland between 1978 and 1981 will run until 14 March 2014 in the Library.