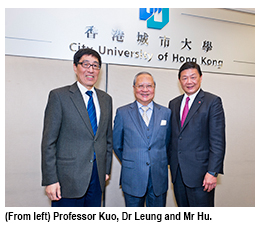 The principal officers at City University of Hong Kong (CityU) presented a series of speeches backed up by video presentations outlining recent success stories and plans for the future at the 7th meeting of the Court on 5 December.
Dr Norman Leung Nai-pang, Pro-Chancellor, discussed leadership, the 4-year interdisciplinary Discovery-enriched Curriculum, international recognition, and future developments in his opening speech.
“We have had another wonderful year at City University of Hong Kong under the very capable leadership of Mr Herman Hu Shao-ming, Council Chairman, and Professor Way Kuo, University President,” he said. “They have both been working very hard together to provide the best possible guidance for leading CityU.”
Mr Hu began his presentation by praising the work of the faculty at CityU. “We have excellent teachers and researchers at the University and we are very proud of all the work that they do,” he said. 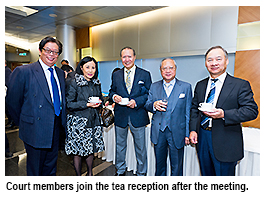 He went on to discuss the proposed School of Veterinary medicine, revealing that on-going discussions and networking taking place were proving highly beneficial for preparations for the launch of the School.

His talk also touched on funding successes, our new facilities and buildings, ranking, and support from the community, especially our alumni networks and our Honorary Fellows and Honorary Graduates who had enriched campus, acting as first-rate role models for our students.
In his presentation, Professor Kuo told the Court about the new CityU Chengdu Research Institute project, a collaborative agreement with the provincial capital of Sichuan which would expand and enrich CityU’s networks in the western part of mainland China.


“Shuangliu County in the southern part of Chengdu is one of the top ten richest counties in China,” Professor Kuo explained. “It is one of the most important economic, transportation, and communication centres in western China.”

Professor Kuo also told Court members that significant progress on the proposal for the School of Veterinary Medicine was underway and that the University had decided to conduct 5-year periodic academic reviews by international experts for all academic units, with the first cycle running from 2014 to 2018.
In addition, Professor Kuo introduced to the Court members some of the main features of the 30th anniversary celebrations for 2014, calling for support from across the CityU community to mark this special occasion.