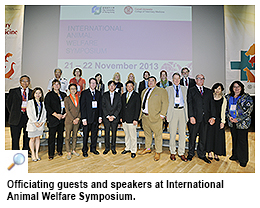 Local and international experts have discussed a range of animal welfare issues at a special symposium at City University of Hong Kong (CityU) as part of preparations to launch a Centre for Animal Welfare and the soon-to-be-created School of Veterinary Medicine.
They will use the International Animal Welfare Symposium from 21 to 22 November to explore why the welfare of pets, strays and feral animals is of such importance to the people of Hong Kong; discuss how Hong Kong has seen a rising tide of interest in terms of keeping animals as pets; and how the HKSAR Government has spearheaded efforts over the last few years into promoting animal welfare and advocating a pet-friendly society.
“This symposium represents a milestone in CityU’s progressive development of the life sciences initiative,” said Professor Arthur Ellis, Acting President of CityU. “CityU acknowledges the significance of animal welfare both as an academic and scientific subject in its own right but also as an important issue to the people of Hong Kong.”
The two-day symposium 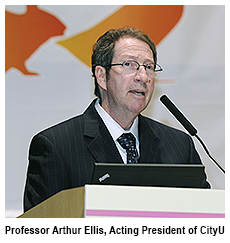 , jointly organised by the Office of Life Sciences Programmes of CityU and Cornell University, is an integral part of plans to create a Centre for Animal Welfare within our School of Veterinary Medicine.
International and local experts in the field of animal welfare, including academics, government officials and NGO representatives, are using the symposium as a platform for sharing their insights and visions on issues such as policy, law, education and publicity related to animal welfare in Hong Kong.
In addition, the event is helping to promote international and interdisciplinary collaboration in animal welfare development in the region.
Officiating at the opening of the symposium were Dr Ko Wing-man, Secretary for Food and Health, HKSAR Government, Dr Christine Loh Kung-wai, Under Secretary for the Environment, HKSAR Government, Professor Arthur Ellis, Acting President, CityU, and Dr Howard Wong Kai-hay, Executive Director, Life Sciences Programmes, CityU.
“I encourage all participants to make use of this opportunity to discuss the issues at hand and to lend support to the Centre for Animal Welfare. We can work together to improve animal welfare not just in Hong Kong but the entire region,” Professor Ellis said.
Dr Howard Wong

stressed the need for an academic platform upon which to collaborate, coordinate, research and justify scientifically the animal welfare issues of the 21st century.
“The Centre for Animal Welfare within the School of Veterinary Medicine at CityU will allow proper scientific and verifiable research to be conducted. It will bring together veterinarians to discuss with biologists, philosophers, biomedical researchers, NGOs and the general public; and for the young to become educated in animal welfare at an early stage," Dr Wong said.
“With a proper scientific approach, we can research and most importantly justify, show and prove the findings that animal welfare does have an impact on the well-being of sentient beings,” he added.