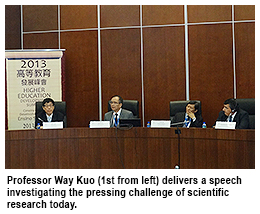 The President of City University of Hong Kong (CityU) delivered a speech investigating the pressing challenge of scientific research nowadays at the 2013 Higher Education Development Summit in Macau on 6 November.
Professor Way Kuo also moderated a panel discussion on scientific research and its function in education, asking big questions for the development of higher education such as what kind of research should scholars pursue. He suggested that we should balance research and teaching.
The summit was organised by the Secretariat for Social Affairs and Culture of Macao SAR and hosted by the University of Macau (UM) as part of the inauguration ceremony of its new campus in Hengqin, Zhuhai. Around 500 participants, including Vice-Premier Wang Yang, officials from the Guangdong government and Mr Chui Sai-on, the Chief Executive of the Macau SAR, attended the ceremony. The invited speakers for the summit were leaders in higher education in Greater China, Europe and Africa, and they shared their insights on the development of scientific research and university education.
CityU donated a tree to UM on the occasion. 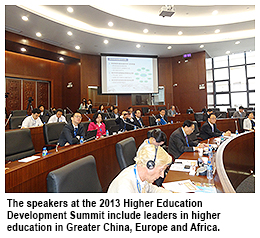