An excursion into history of material world 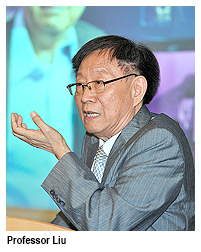 The audience attending the latest talk in a specially commissioned series of lectures at City University of Hong Kong (CityU) was treated to an enthralling excursion into the history of the relationship between materials, technology and civilisation.
In the President’s Lecture Series: Excellence in Academic on 21 October, Professor Liu Chain-tsuan, University Distinguished Professor in the College of Science and Engineering, explored how human civilisation has discovered, invented, transformed and manipulated different kinds of materials to enhance the quality of life.
“Historically, material preparation and applications have played a crucial role in human civilisation,” said Professor Liu, a renowned scientist in the area of advanced structural materials.
“We have to bear in mind that material development controls industries and technologies, and the rapid development and implementation of new materials are currently the main driving force for technology innovation,” he said.
Professor Liu, a Member of the US National Academy of Engineering and a Foreign Member of the Chinese Academy of Engineering, began his address by explaining how the increasing thresholds for the temperature of human-controlled fire over the past few thousand years dominated material development, enabling, for example, the transition from the Stone Age and Bronze Age to the era of advanced steel production.
But these developments have also had a negative impact on the planet, he said, especially in terms of the deterioration of air quality, which, sometimes, is due to steel production and construction. 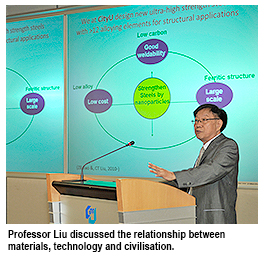 The situation was getting so bad in some parts of Beijing, for instance, that the city government was considering stopping all car use and closing schools during days when the air pollution was very serious. In addition, he said rapid urbanisation and industrialisation were forcing China to spend RMB175 billion on cleaning up drinking water in rural areas.
However, materials development also promises solutions to problems such as emissions and pollution. Professor Liu said it was possible to reduce steel consumption and the corresponding emissions through the manipulation of materials. By strengthening steel by as much as three times, it is possible to reduce pollution emissions in the construction industry by nearly 70%, he said.
Professor Liu, who did his undergraduate studies in Taiwan and his postgraduate work in the US, went on to discuss the major problems involved in creating conventional high-strength steels and CityU’s contribution in this area, in particular through the exploitation of nano-particles. He also explained how the 9/11 attacks in the US had spurred research into fire resistant steel to prevent beams from softening when exposed to intense heat.
In addition, he discussed work in creating alloys that reduce the weight of airplanes and thus help to cut emissions and fuel consumption, and research into bulk metallic glasses that, he said, could stimulate a revolution in materials development due to their unique qualities: strength, durability, super-cooling properties and lack of microstructural roughness due to grain structures and particles, making them suitable for use as materials for submicro and nanoscale grating.
He concluded his talk by saying that today the successful development and application of new materials should serve as the basis to measure the well-being of societies and countries, suggesting that high-profile economic countries such as China needed to prepare for the future by focusing on materials development.
“Now China has to change from a major production country to a high-tech manufacturing country via the development of advanced materials and manufacturing technology,” he said.