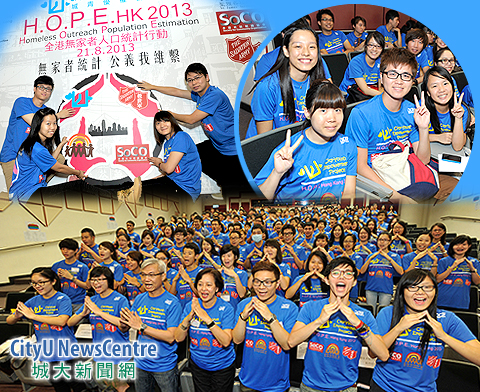 Around 300 students from City University of Hong Kong (CityU) and volunteers from other institutions and community organisations participated in a city-wide homeless street count.
The Homeless Outreach Population Estimation (HOPE Hong Kong 2013) took place on the night of 21 August. A kick-off ceremony was held at CityU on the same day.
Community organisations will use the accurate, up-to-date data provided by the street count to call for useful resources. Currently there is a lack of accurate data about the number of people who are homeless in Hong Kong. The Social Welfare Department conducted its last street count over 10 years ago.
The count was organised by CityU’s university-wide volunteer programme City-Youth Empowerment Project together with community partners: Society for Community Organization, the Salvation Army, and St James’ Settlement.
The interim report will be released in late November.