An international symposium at City University of Hong Kong (CityU) brought together experts in the fields of imaging, proteomics, metabolic phenotyping and healthcare to discuss how advances in these scientific disciplines can be translated into improvements in patient treatment and population health management. 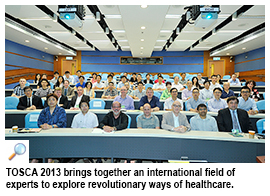 The pioneering International Symposium on Translating Omics Science to Clinical Applications (TOSCA 2013), held from 13 to 15 August, underlines CityU’s commitment to advancing research into public health. It was organised by CityU’s Department of Biology and Chemistry.
This new field of scientific endeavour provides insight into the causes of disease, the rate of disease progression, mechanisms and predictions of drug toxicity, and an understanding of biochemical pathways.
Research in this field has also led to the development of novel technologies, including the iKnife invented by Dr Zoltan Takats and his research team at Imperial College London. The iKnife is a revolutionary piece of biomedical engineering that can literally sniff out cancerous tumours during a surgical operation.
The international field of experts, including interdisciplinary scholars from CityU, explored new ways of treating patients, detecting diseases and managing healthcare at the two-day symposium. The participants helped address such health challenges as the ageing population, the rise in diet-related diseases such as diabetes, and obesity, and cognitive diseases such as Alzheimer’s and dementia. 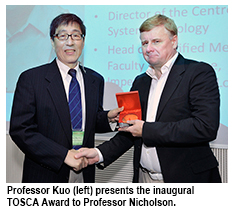 Welcoming participants to the symposium, Professor Way Kuo, President of CityU, said the University was honoured to host a conference that fostered academic exchanges concerning ground-breaking research and technologies that improve the well-being of the general public.
Discovery lay at the heart of academic research, Professor Kuo said, adding that CityU had embraced this element in its new 4-year curriculum. “Meetings like this one are a model for the kind of innovative research taking place around the world today, and one that I hope will inspire our students and faculty alike,” Professor Kuo said.
During the symposium, Professor Jeremy Nicholson, Head of the Department of Surgery and Cancer at Imperial College London, received the inaugural TOSCA Award. Professor Nicholson heads the UK’s government-funded phenome resource centre, which has been transformed from the anti-doping laboratory at the London 2012 Olympics. His research promises to revolutionise healthcare.