Two students from City University of Hong Kong (CityU) have realised their dream of cycling more than 1,000 km around Taiwan in just 15 days.
Alpha Wong Ying-kit, a Year 3 student of the Department of Information Systems, and Bone Tam Ka-kit, a Year 1 student in the Associate of Arts in Applied Chinese Studies, wished to do something special and meaningful before their graduation. The pair took on the challenge of taking a cycling tour of Taiwan in June, finding courage to persevere through challenges and pursue their dreams.
The cycling expedition was also an opportunity to raise funds for the Hong Kong Cancer Fund as Bone Tam wished to pay tribute to his mother who died of cancer seven years ago and give encouragement to other cancer patients. Before setting out on the tour, they gave their charity ride a name — Bike with Dream — and created a website to collect donations.

Both Alpha Wong and Bone Tam are teammates on the CityU fencing team, but despite their training in the sport are not particularly good at riding bikes. Touring around Taiwan in 15 days meant cycling 80 km each day, a distance twice as long as a marathon race. The tour placed tremendous demands on their will and physical strength, especially as they didn’t have any logistics support on the road. Everything from clothes and computers to cameras, tripods and essential spare parts had to be carried on their bikes.
The second half of the journey was especially challenging, as it consisted mainly of uphill roads. In addition to the endless climbing, they experienced flat tires and sometimes had to ride at night. They also braved heavy downpours for days at a time. The journey became so gruelling that one of them came down with an illness, and both thought about giving up and even hitching a ride.
“Our route had an easy start but became more difficult as the miles went by,” Alpha Wong said. “After climbing mountain over mountain in the latter part of the route, our confidence began to shake. However, seeing each other cycling alongside helped us persevere.” 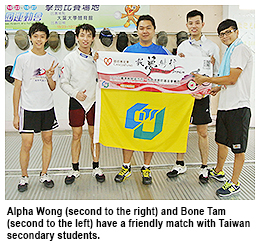 The biggest challenge was tackling Mount Shouka in southern Taiwan. “In order to stay on schedule, we decided to ride uphill at night. There were no street lights on the road and big trucks would speed past us at any time. Finally, we came downhill safely and arrived at a local hostel. It was already 10 at night,” Alpha Wong said.
To honour their promise of serving the community, they visited the Formosa Cancer Foundation and street sleepers in Taipei, and had a friendly fencing match with the students of Taipei Municipal Zhong-zheng Senior High School. They also shared their stories with new friends and gave out self-produced name cards promoting their fund raising project.
Reflecting on how they achieved their goal, Bone Tam said, “After cycling around the whole island of Taiwan, I realised that man only makes up a tiny portion of this vast world and learned to avoid getting vexed by trivial matters. I would encourage young people to pursue their dreams in order not to have any regrets in life. My advice is: Don’t stop trying for fear of failure.”
Alpha Wong added that he has a better understanding of cancer patients after planning the fund-raising project and came to know the power of teamwork and friendship following the journey.
The two students are grateful to Professor Way Kuo, CityU President, for his encouragement. They also expressed their heartfelt thanks to Ms Rebecca Lai Yuk-lan, Physical Education Officer and manager of the fencing team at Student Development Services, for offering them the advice and assistance that helped them prepare for their journey.
To visit the website of Bike with Dream, go to http://www.cancer-fund.org/diy/view.aspx?pid=55&lang=TC.