A relaxed dialogue with Professor Way Kuo, President of City University of Hong Kong (CityU), has revealed a personality that is at once dedicated to science and filled with the joys of life. 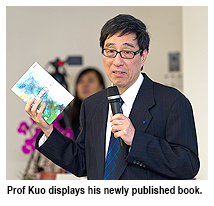 Through the coordination of the Run Run Shaw Library, Professor Kuo held a dialogue with members of the CityU community on 24 May, talking on a series of topics ranging from various energy options for humankind to interests and hobbies in his non-academic life.
In a talk hosted by one of the assistant librarians, the President started by sharing his views and ideas about nuclear power and the risks and reliability issues involved.
“The very first public talk I gave in Hong Kong, right after I arrived here in 2008, was on the same topic, but nobody was interested,” he recalled. Now, after the Fukushima accident in 2011, more people are concerned about the risks of nuclear power, he added.
There are seven types of energy in current use, each with merits and demerits, Professor Kuo pointed out, referring to the newly published Chinese version of his recent book, A Spectrum of Energies: Reflections on Energy, Environmental Protection and Occupational Safety in the Wake of Fukushima Nuclear Accident.
“There’s no such thing as ‘the best’ energy policy”, said the professor, replying to a question raised by his interlocutor. Decisions on what kind of energy type should be used must be based on a good balance among three elements, namely the necessity, economic welfare, and reliability and sustainability of that energy, he said. 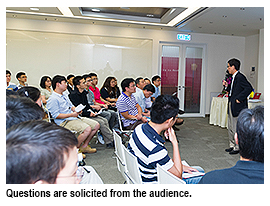 As to the fear of nuclear accidents, Professor Kuo assured the audience that the potential problem can be tackled. Citing the three best-known accidents so far – Three Mile Island in the US, Chernobyl in the former Soviet Union, and Fukushima in Japan – he identified the main cause as human error or management mistakes, rather than hardware failures.
The hardest question to answer, Professor Kuo admitted, was how to safely dispose of highly poisonous nuclear waste. A more constructive approach to the problem, he argued, was to devise ways to consume all or most of the nuclear fuel while generating power, thus minimising the waste, a goal that scientists are working hard to achieve.
The dialogue was enlivened by questions from the audience about various issues, such as the feasibility of wind power, and the risks of the many nuclear power plants in China.
The second part progressed in a more light-hearted vein. Professor Kuo talked about interests and hobbies in his personal life. At this point, the powerpoint screen brought up an image of From a Cottager's Sketchbook, a collection of familiar essays by the late Chinese writer Liang Shih-Chiu, widely read and loved for the author’s wit and wisdom in talking about some simple daily-life events. “I love it,” Professor Kuo confessed. “It is down-to-earth; there are no slogans in it.” 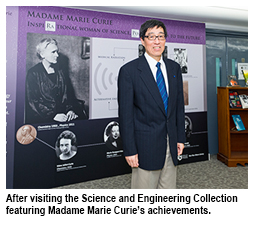 The next hobby he professed was marathon running, as he has taken part in such events every year since he came to Hong Kong. When asked if he planned to run in next year’s marathon race, he answered, “Yes, of course.”
“And I love cooking; cooking is a combination of art and science,” said the professor. For instance, he disclosed his secret in preparing “steamed fish” was using a microwave stove rather than a steamer, a method he invented after repeated experiments with the cooking time and the amount of water. The scientist in him stands out even in his enjoyment of a hobby.
The dialogue was followed by a visit to the Science and Engineering Collection, featuring the achievements and publications of Madame Marie Curie, the first female Nobel laureate. ​