​Professor Way Kuo, President of City University of Hong Kong (CityU), delivered a special report about nuclear power at the monthly meeting of the Office of the President of Taiwan on 7 May, the day after the ceremony to mark the inauguration of Academic 3. 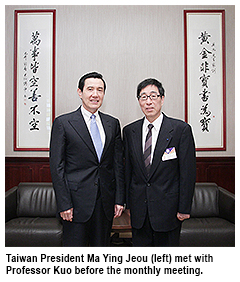 The monthly meeting in Taiwan was attended by over 200 people, including high-ranking Taiwanese officials such as President Ma Ying-jeou, Vice-President Wu Den-yih, Premier of the Executive Yuan Mr Jiang Yi-huah, President of the Judicial Yuan Mr Rai Hau-min, President of the Examination Yuan Mr Kuan Chung, President of the Control Yuan Mr Wang Chien-shien, Honorary Chairman of the Kuomintang Mr Wu Po-hsiung, other important representatives, the Deputy Minister of National Defence, and commanders of the three armed forces.
Taiwan has experienced a heated dispute over the last 30 years about whether to continue or suspend the construction of the No. 4 Nuclear Power Plant. The Fukushima nuclear accident has provoked further criticisms and a massive public outcry. However, some of the criticism is mingled with political factors. The populist mentality has replaced rational thinking, some commentators have argued. A referendum on the construction of the No. 4 Nuclear Power Plant now seems inevitable.
President Ma invited Professor Kuo to give a speech at the monthly meeting on how to view the development of nuclear power and other energies from the perspective of reliability so that the people of Taiwan could address the long-standing impact of nuclear power on social development.
Professor Kuo said nuclear power was the best alternative to fossil fuels in terms of cost, efficiency and environmental friendliness.
After the Fukushima nuclear accident, although some countries decided to give up nuclear power in the face of domestic opposition, others were determined to develop nuclear power by sticking to the basic principle of constant improvement.
Even the major oil-producing countries were planning to develop nuclear power over the coming 20 years for the sake of national security, energy pluralisation and ensuring the “reliability and sustainability” of energies. 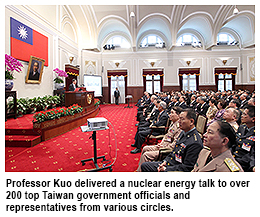 Citing a regional example, Professor Kuo said South Korea had formulated three national strategies 20 years ago aimed at surpassing the US, Japan and China in the fields of automobiles, semi-conductors and Chinese medicine, or Korean medicine as it is referred to in South Korea. In addition, it aims to become the third largest exporter of nuclear power technology.
Safety and transparency were essential to the development of nuclear power, he said. Out of the world’s three biggest nuclear accidents, a great deal is known about the Three Mile Island nuclear accident, which happened in 1979. Statistics indicate that cancer rates among residents living near the nuclear plant during the 34 years since the accident took place are comparable with rates for people living in New York City.
In contrast, there is a lot of hearsay about the Chernobyl nuclear accident, which happened in 1986, because there is a dearth of reliable information. “We can draw the same lesson from the Fukushima nuclear accident. No matter what happens to the No. 4 Nuclear Power Plant, it is of vital importance to provide transparent information,” Professor Kuo said.
One of the reasons the general public in Taiwan is worried about the No. 4 Nuclear Power Plant is people think it was pieced together with equipment from different countries. Professor Kuo noted that the piecing-together was not problematic; it is how the plant is assembled, managed, controlled and designed that is more important. 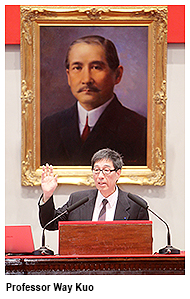 Professor Kuo cited as examples the famous Bell Laboratory where he had worked previously and the Wang Laboratories whose computers had been very fashionable for a time. Both were on the decline due to their reluctance to be pieced together with others. Likewise, Trans World Airlines (TWA) in the US disappeared because it was unwilling to unite with other airlines.
In any case, Taiwan’s dams were more worrying than its nuclear power plants, Professor Kuo argued. While nuclear plants in Taiwan have maintained a good operational management, dams are faced with a looming crisis. For example, in 1975 a dam burst in Henan, China, killing 250,000 people.
Professor Kuo acknowledged that nuclear waste was a serious problem, but he said many countries had made progress in addressing this problem, searching for innovative ways to utilise nuclear fuel more efficiently, and thus reducing waste.
He pointed out that we should not turn a blind eye to the human casualties and environmental pollution caused by non-nuclear energies while scrutinising nuclear wastes. He quoted an academic thesis published in the Environmental Science and Technology Journal in 2013 by scientists Kharecha and Hansen from the US National Aeronautics and Space Administration (NASA), which adopted a quantitative method for the first time to analyse the impact nuclear power has had on human life. The report pointed out that, taking into account the serious consequences of the three biggest nuclear disasters in history, the use of nuclear power between 1971 and 2009 prevented approximately 1.8 million people dying due to causes related to the use of fossil energies.
“I don’t want simply to say ‘yes’ or ‘no’ to nuclear power,” said Professor Kuo. “I only hope that people will analyse the advantages and disadvantages of different energies in a rational way. This is the only way we can have a better understanding of the situation.”
In his conclusion, Professor Kuo said different people and governments are dealing with the planet’s energy problems in different ways, but in the knowledge that energy is critical to national security and social insurance. While some people were concentrating on their work, he said, some were adhering to the principle of self-preservation, some were indulging in loud and empty talk, and some others were even intimidating people by resorting to populist doctrine.
But people who were living in a free and democratic environment should not “let the chips fall where they may”, he said, or follow others blindly. They should not put aside industrial safety and innovation or simply talk big about energies and environmental protection, he added.
After the speech, President Ma asked Professor Kuo if opposing or abandoning nuclear power was a global trend.
Professor Kuo replied that people usually thought more highly of nuclear power if there was an oil crisis. If an accident took place at a nuclear power plant, people would begin to worry about the safety of nuclear power. Since 2011 the development of nuclear power has slowed down and the demand for nuclear power has declined. But that’s only the “short-term trend”, Professor Kuo said. Although Germany and a few other countries have decided to abandon nuclear power, other countries are still going ahead with their plans for this energy source.
Japan and Taiwan were the most serious about looking into the problem of nuclear power, but many other countries were principally in favour of its  development, he said.
Professor Kuo said opinion surveys conducted in Japan this year among the mayors whose cities were situated around nuclear reactors revealed that 54% favoured the restart of nuclear reactors whereas 28% were against. Meanwhile, 57% of American people are in favour of nuclear power according to surveys conducted over the last 10 years. After the Fukushima nuclear accident, the rate of support did not drop rapidly. These results were reflected in surveys conducted in the UK, too. And men are usually more supportive than women of nuclear power, research suggests.
The monthly meetings held at the Office of the President of Taiwan are chaired by the President of Taiwan. The meetings are a channel for publicising the government line and a platform to exchange views. While discussing current national or public affairs, the meeting will invite scholars and experts to deliver a special report.