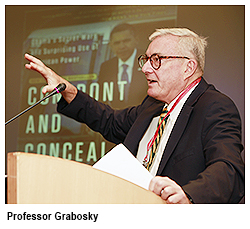 The internet has revolutionised human communication for the good, but it has also greatly facilitated crime, according to one of the principal speakers at a conference dedicated to reviewing and advancing understandings of organised crime in Asia at City University of Hong Kong (CityU) on 2–3 May.
“The increasing pervasiveness of digital technology makes its continuing exploitation for criminal purposes inevitable,” said Professor Peter Grabosky of the Australian National University (ANU) during his opening address at the event, which was co-organised by Professor Lo Tit-wing, Head of CityU’s Department of Applied Social Studies, and ANU.

In his talk, Professor Grabosky asked the audience to consider what we mean by “security” and “organised crime” before assessing risks posed by a variety of cybercriminals ranging from groups such as DrinkOrDie, a software piracy group closed down in 2001 by Operation Buccaneer, an international copyright piracy investigation run by the US government, to GhostNet, large-scale cyber-spying identified by the Canadian watchdog Information Warfare Monitor.
Other talks at the event looked at issues such as financial crime, the heroin trade and Triads, among others, from legal, criminal justice, policing, public policy, criminological and sociological perspectives.

CityU’s Professor Lo, an international expert in organised crime, corruption and triad societies, gave two talks during the conference. One concerned the “Triadisation” of young people in Macau, and how the model used in his research compares with what happens in Hong Kong. The other talk was on the drug-dealing networks of young user-dealers in Hong Kong. 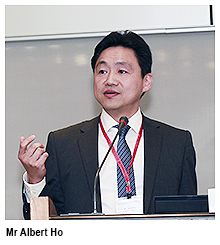 The conference was aimed at practitioners as well as academics. Mr Albert Ho Shi-king, Assistant Commissioner of the Customs and Excise Department in the Hong Kong government, brought with him twenty-five years of experience to discuss the latest enforcement findings in trans-border smuggling between Hong Kong and mainland China.
Other speakers included representatives from Cardiff University, Kings College London, San Diego State University, University of Oxford, and Utrecht University.