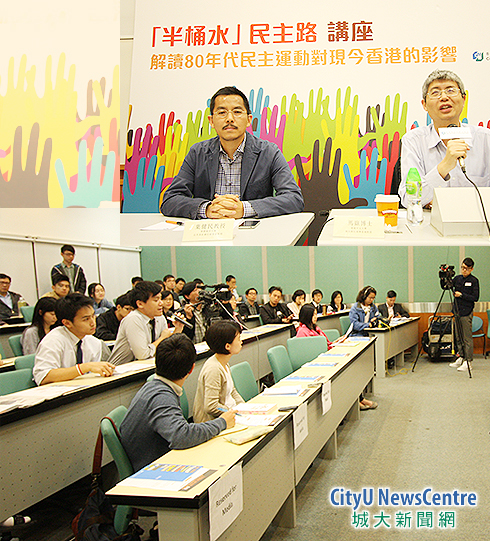 A talk organised by City University of Hong Kong Press (CityU Press) explored how the 1980s democratic movements connect with Hong Kong’s political development today and discussed Hong Kong’s political prospects.
The talk, which was titled “Is Hong Kong getting closer to ‘real’ democracy?” held on campus on 21 March, tied in with the publication of a new CityU Press publication called An Oral History of Democratic Movement of Hong Kong in the 1980s.
The guest speakers at the event were Professor Ray Yep Kin-man (left) of CityU’s Department of Public and Social Administration and Dr Ma Ngok (right), Associate Professor in the Department of Government and Public Administration at The Chinese University of Hong Kong.
In their discussion, the two acadmics explained how political campaigns have been a regular occurrence in the 15 years since the reunion of Hong Kong and mainland China, suggesting that social movements are an indication of deficiency in a political system.
They said that today’s social movements in Hong Kong encapsulate the opinions of the new generation and reveal their demands for “desirable Hong Kong values” and “a future path ahead for Hong Kong”.
In fact, they said, the current political situation links directly to the democratic movements in Hong Kong during the 1980s, and today’s “partial democratic system” stems from the same era.