The School of Creative Media (SCM) of City University of Hong Kong (CityU) invited the internationally acclaimed Chinese calligraphy master Wang Dongling, Professor at the China Academy of Art, to perform a large-scale “dance writing” performance at the Run Run Shaw Creative Media Centre (CMC) on 8 March.
This extraordinary event was intended to promote artistic exchange and the appreciation of modern calligraphy among students and the general public.
Professor Wang created a 2.5-metre wide and 30-metre long calligraphic art as a gift to CityU. The saying he wrote means “Just as Heaven keeps its vigour through movement, so a gentleman keeps on self-improving through ceaseless exertion”. It was written in the biggest Chinese characters ever done by Professor Wang and the calligraphy painting will hang down the nine floors of the imposing stairwell of the CMC building designed by Daniel Libeskind. 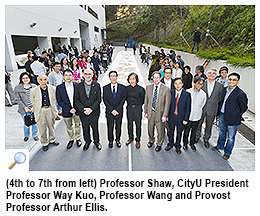 SCM faculty captured Professor Wang’s exuberant cursive calligraphy both by means of 3D cinematography and by mounting a miniature video camera close to the tip of the artist’s large brush. The footage from the event will then be turned into a crossover artwork that combines both old and new media.
Professor Jeffrey Shaw, Dean of SCM, said, “These unprecedented digital recordings of Professor Wang’s work will reformulate our understanding and appreciation of the aesthetic intensities he achieves in the drama of his performance and in the lyrical imagery that flows from his embodied brush.” 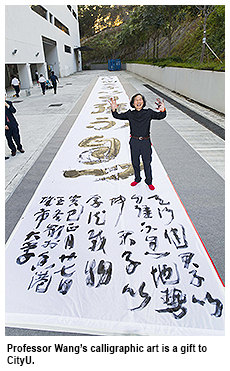 Professor Wang’s first large-scale cursive script calligraphic artwork, Wandering Beyond (7.5 x 12.5 m), was done in 2003 as part of the 75th anniversary celebration of the China Academy of Art. Other important works of his include the Dao De Jing of the ancient Daoist philosopher Laozi (4.95 x 37.5 m), and the Buddhist Heart Sutra (2011) (7.3 x 18 m).
Professor Wang has participated in numerous solo and exhibitions in China and overseas, including China: 5000 Years, at the Guggenheim Museum in New York in 1998; the Exhibition of Chinese Calligraphy at Paris-Sorbonne University, also in 1998; Brushes with Surprise: The Art of Calligraphy in Modern China at the British Museum in 2002; and Brush and Ink: The Chinese Art of Writing at the Metropolitan Museum of Art in New York in 2006.
The event was co-presented by SCM, CAA, and The Ink Society.
​