Taking on the challenges of a German speech competition 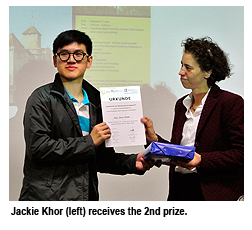 The 2nd Inter-University German Speech Competition held on 17 November was an unforgettable experience. We are students minoring in German Studies but managed to perform as competitively as German major students, bringing home a 2nd prize and two finalist awards.
Undergraduate students from six local tertiary institutions participated in the competition, and only 12 contestants from four institutions proceeded to the finals. All three of us were among the finalists to compete with our counterparts, and City University of Hong Kong (CityU) was the only university to win a prize by a German minor student.
Finalists were required to give their speeches on the topic “Warum lerne ich Deutsch?” (“Why do I learn German?”) in front of the judges. We impressed the judges and audience with our creative, fluent and confident presentations due to our good preparation.
Despite our busy schedules and numerous deadlines to meet, we spared time for rounds and rounds of practice and gave feedback to each other to improve our presentations. We even had one final rehearsal in the morning on the day of the finals. 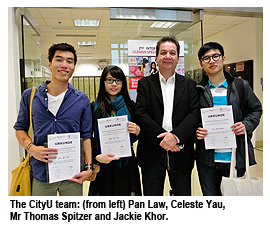 The competition was a good opportunity for us to present our German-speaking abilities. As students merely studying German as a minor, we showed great courage in participating in this speech competition and had the chance to observe how contestants from other universities performed and how we compared with them. On average, we only study 3 hours of German a week each semester. Nevertheless, we were able to make use of all available resources to upgrade ourselves in order to take part in this speech competition.
Studying foreign languages at CityU has enriched our undergraduate studies here. It is interesting and challenging as it requires determination to start from scratch and pay attention to the characteristics, features and structure of a language we are totally unfamiliar with. And at CityU, the availability of such foreign language courses is very beneficial to students. We hope that in the future, CityU will continue to offer such foreign language classes for students to add some variety to their academic life at the University.
We would like to thank Mr Thomas Spitzer, the German instructor at the College of Liberal Arts and Social Sciences who provided guidance in our German studies and preparation for the competition.
The 2nd Inter-University German Speech Competition was co-organised by the Goethe Institute, the Consulate General of the Federal Republic of Germany in Hong Kong, the Department of Government and International Studies of the Hong Kong Baptist University and the Consulate General of Switzerland in Hong Kong.