​
Global and regional developments in the world of nanotechnology were the focus of a distinguished lecture delivered by the President of the Chinese Academy of Sciences (CAS) at City University of Hong Kong (CityU) on 21 November. 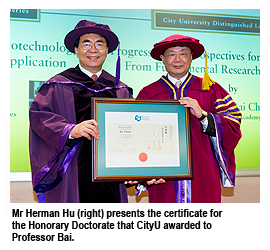 Professor Bai Chunli, giving his first lecture in Hong Kong since he was elected as the President of CAS in 2011, also received the certificate for the honorary doctorate that CityU conferred on him last week in absentia.
The lecture, titled “Progress in and Prospectives for Nanotechnogy: From Fundamental Research to Application”, emphasised how governments and scientists needed to work together to identify key issues related to the nanotechnology industry to ensure that new ideas were properly funded and would be of benefit to society. More interdisciplinary collaborations and partnerships were also needed to help to enhance knowledge transfer and advance new areas within this broad and burgeoning field.
“We have to identify and determine long-term strategic goals for nanotechnology and ensure long-term and stable financial support and build a technology-transfer infrastructure,” Professor Bai said. 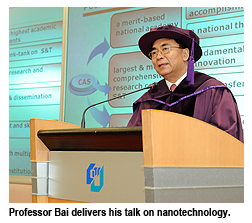 The first part of his talk concentrated on the role and achievements of CAS,
describing the academy as the “engine” for the development of science and technology in China. One notable example cited was the development of the RMB 2.67 billion China Spallation Neutron Source in Dongguan, Guangdong Province, which will be open to international users.
He also provided an overview of the global nanotechnology industry, stating that this market was likely to expand by 25% a year, signaling growth in areas such as catalysts, transistors, coatings, and biomedical applications, particularly in treating cancer. These fields are major areas of strength in CityU’s College of Science and Engineering.
In addition, he reported on the current state of nanotechnology in mainland China, comparing the number of publications and citations related to work by researchers in the mainland with their counterparts in the rest of the world, highlighting the growth and the potential for improvement in the quality of the research.
By way of illustration of the future potential benefits of nanotechnology, Professor Bai described a new type of nano material for printing created by the Institute of Chemistry under CAS that has the potential for radically changing the printing industry.
“Printing with this material is cheaper, causes less pollution and allows us to recycle the printing plates,” he said. 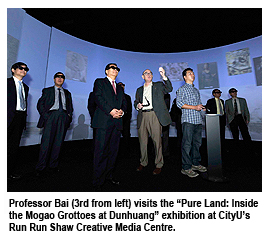 Prior to his talk, Professor Bai visited the Run Run Shaw Creative Media Centre, where he said he was impressed by the “Pure Land: Inside the Mogao Grottoes at Dunhuang” exhibition created by Professor Jeffrey Shaw, the Dean of the School of Creative Media.
Mr Herman Hu Shao-ming, CityU Council Chairman, presented Professor Bai with the certificate for his Honorary Doctorate just before the lecture.
“It is my great honour and privilege to receive the Honorary Doctorate of CityU, one of the fastest growing universities in the Asia-Pacific region,” Professor Bai said.
Biography
Born in 1953 in the city of Dandong, Liaoning Province, Professor Bai received his bachelor’s degree from Peking University in 1978. He continued his studies at the Chinese Academy of Sciences’ Institute of Chemistry, where he received his MSc and PhD degrees in 1981 and 1985 respectively.
As a scientist, Professor Bai’s research spans many areas, from the structure and properties of polymer catalysts, X-ray crystallography of organic compounds, and molecular mechanics and extended X-ray absorption fine structure (EXAFS) research on conductive polymers.