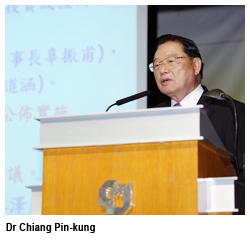 Dr Chiang, who retired from the SEF in September, delivered the talk at the invitation of the Asia Pacific Taiwan Federation of Industry and Commerce, the Far East Trade Service Inc. and City University of Hong Kong (CityU).
During the lecture, Dr Chiang talked about his eight meetings with mainland officials and reviewed the development of relations across the Straits over the past few decades. He also discussed the future development of trade, economies and communities of Taiwan, the mainland and Hong Kong. His lecture attracted a large audience who actively took part in the Q&A session.
Since 2008, Taiwan’s SEF and the Association for Relations Across the Taiwan Straits (ARATS) of the mainland have been promoting trade and commercial cooperation through a systematic approach that deals with simple issues first. Over the years, the two organisations have notched up substantial achievements, signing 18 agreements, introducing direct mail, direct sea transportation and direct flights between Taiwan and the mainland as well as signing the Economic Cooperation Framework Agreement (ECFA).
In his frequent travels across the Straits over the years, Dr Chiang held eight meetings with Mr Chen Yunlin, Chairman of ARATS. The strenuous efforts of Dr Chiang and Mr Chen have laid a solid foundation for positive developments across the Straits. 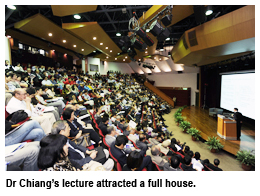 Dr Chiang has experienced ups and downs during the development of relations between Taiwan and the mainland. For him, the development can be divided roughly into two phases. The first was a nervous, confrontational phase that began in 1949 that turned into a new stage when Mr Chiang Ching-kuo, then president of Taiwan, allowed retired soldiers to visit their hometowns on the mainland in 1987, which encouraged Taiwanese businessmen to look for investment opportunities on the mainland.
Although there were jitters across the Straits with the appearance of the “Two States Theory” and the regime changes in Taiwan, relations have been evolving in a progressive manner. The era of the three No’s (no contacts, no meetings and no compromises) in the early years gave way to the high demand for direct flights today. Despite a heavy workload, Dr Chiang said he was gratified to see people across the Straits living happily.
The signing of the ECFA and 18 other agreements marked a milestone in the development of relations across the Straits and exemplified the achievements made by Dr Chiang for the people in the Greater China Region over the years. He indicated that governments across the Straits have successfully established the most stable and promising relations for Taiwan and the mainland for the past 60 years. 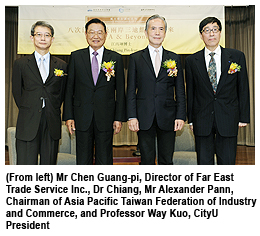 The success is attributable to the two governments’ pragmatic approaches to “negotiation instead of confrontation”, “collaboration for win-win”, “tackling simple to complex issues systematically”, and “economy comes first, politics later”.
Currently, Taiwan’s exports to the mainland have amounted to US$120 billion. These achievements are not only significant to relations across the Straits, but also beneficial to Taiwan’s trading with Asian and overseas countries. Dr Chiang said he hoped that Taiwan and the mainland could sign agreements sooner on goods, services, free trade and dispute settlement and put them into effect. He believed that combining the “hard strength” of the mainland and the “soft skills” of Taiwan will definitely produce synergy.
Now that US President Barack Obama has been re-elected and the 18th National Congress of the Communist Party of China has been held, Dr Chiang said the global economy will steadily advance. The ECFA and the 18 agreements have provided Taiwan businessmen with an advantageous platform and will facilitate economic and trading cooperation across the Straits. The businesses operated by Taiwan entrepreneurs all over the world represent an extension of Taiwan’s economic strengths.
Before the end of the lecture, Dr Chiang, turning 80 soon, shared his thoughts on retirement. “There have always been two wishes on my mind. The first is to have peace across the Straits. The second is that all people in Taiwan and the mainland can live happily,” Dr Chiang said. “When the new SEF building was completed in May, some people projected a big Chinese character ‘滿’ [full] on the wall. The character was drawn inside a circle with a crack. They wanted me to continue to work until peace across the Straits had been fulfilled.”
On 8 August this year, Dr Chiang had his eighth meeting with Mr Chen and signed the 18th agreement. Then he retired with his objectives fully achieved.
At the end of his lecture, Dr Chiang said he hoped that people in Taiwan and the mainland can work together to build a peaceful and happy living environment for future generations.