​
One impressive scene in the recent movie MI4: Ghost Protocol sees US agent Ethan Hunt place a USB thumb on top of a computer monitor and within seconds, all the data on the computer were downloaded and displayed. 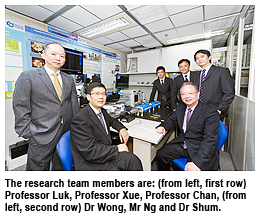 Such sci-fi action will soon be turned into reality as a high-speed wireless data transceiver system will be developed at City University of Hong Kong (CityU), with the sponsorship worth HK$20 million.
The CityU team is led by Professor Xue Quan, Deputy Director of CityU’s State Key Laboratory of Millimeter Waves (SKLMW) and a member of the faculty in the Department of Electronic Engineering (EE). He and his team have received sponsorship worth about HK$18 million from the Innovation and Technology Fund under the Innovation and Technology Commission to develop the high-speed wireless data transceiver system.
This is the largest-ever sponsorship that the University has received from the Fund. The industry has also provided HK$2 million to support this project.
The data transmission rate of the system under development can be as high as 7Gb per second, which is almost 50 times faster than the Wi-Fi system widely used today. The project showcases again how CityU spearheads innovation in high-speed wireless communication technology.
Professor Xue’s research team includes Professor Luk Kwai-man, Director of SKLMW and Chair Professor of EE; Professor Chan Chi-hou, Member of SKLMW Advisory Committee and Chair Professor of EE; Dr Wong Hang, Member of SKLMW and Assistant Professor of EE; Dr Shum Kam-man, Senior Engineers of SKLMW; and Mr Ng Kung-bo, Engineer of SKLMW.
A wireless radio waves can have different wavelengths to carry messages and data in open air via antenna transmission. In recent years, many countries have allowed the free use of the 60GHz frequency band (i.e. electromagnetic waves with a wavelength of 5 millimetres). With a much larger bandwidth than the one used by 2.4GHz and 5GHz Wi-Fi systems, the 60GHz frequency band will allow for the instant transmission of very large amounts of data, such as uncompressed high-quality multimedia streaming. 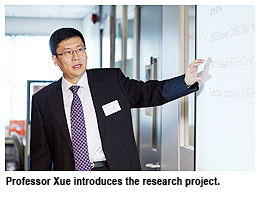 “The higher the frequency of an electromagnetic wave, the more usable the bandwidth and data transmission will be. Current technologies are simply not able to meet the ever-increasing demand for the faster speed and larger volume of wireless data transmission,” Professor Xue said.
Professor Chan pointed out that the current high-speed wireless data transmission rate was only in Mb per second. With this transmission rate, streaming videos played on smart phones are often interrupted. However, broadcasts will be smoother when higher frequency wireless transmission technology is available in the future, more akin to downloading and playing a movie on a computer that uses internet broadband services via optical fibre.
In the future, medical professionals visiting patients in a hospital ward installed with this high-frequency wireless transmission system will only need to tap on a tablet computer to access relevant medical records and examination results. Even large-sized craniocerebral electronic scanning film and gastrointestinal endoscope video will be instantly accessible, helping the medical professionals to diagnose patients more precisely.
To make the 60GHz frequency band widely applicable in wireless data transmission, the primary need is to develop a high efficiency and low cost transceiver system. The research team will develop a millimeter-wave antenna and chip, and integrate both into a transceiver system, making contributions to the development of the local industry of high-speed wireless data transceiver technology.
Professor Luk said the research team would use innovative concepts, design methodologies and technologies to develop the system. Also, the team will use low-cost CMOS (Complementary metal–oxide–semiconductor) technology to drive down costs and enhance the efficiency.
“Our team has attained significant achievements and gained extensive experience in the development of antennas and radio frequency integrated circuits at CityU’s State Key Laboratory of Millimeter Waves. We have full confidence in this project,” Professor Xue said.
The best distance for using the 60GHz frequency band to transmit data is within 10 metres. CityU’s research team will fully engage themselves in the development of the wireless data transceiver system in early 2013. The whole project is expected to complete in two years.