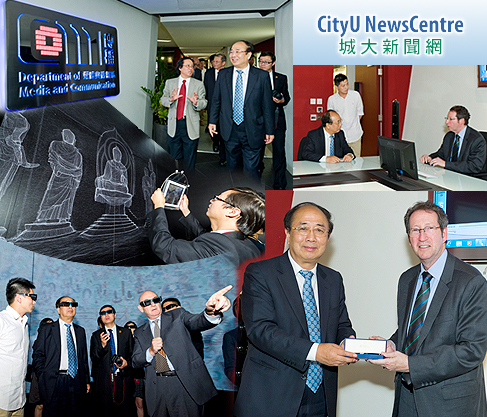 A high-level delegation led by Mr Zhao Qizheng, Vice-Chairman of the Foreign Affairs Committee of the Chinese People's Political Consultative Conference, toured the Run Run Shaw Creative Media Centre (CMC) at City University of Hong Kong (CityU) on 24 August.
The delegates were familiarised with the academic programmes based in the CMC by Professor Jeffrey Shaw, Dean of the School of Creative Media, and Dr He Zhou, Acting Head of the Department of Media and Communication. They also toured the CMC’s state-of-the-art teaching facilities, including the Omnimedia Digital Newsroom, 3D Virtual TV Studio, Gallery 360, and the Future Cinema Studio.
In addition, Professor Arthur Ellis, Provost and Acting President, discussed recent updates at the University and introduced the new Discovery-enriched Curriculum.
After the visit, Mr Zhao reported that CityU was clearly able to combine creativity and technology in innovative ways, raising “creativity” to a higher level. He added that CityU had left him with the best impression out of all the universities he had visited recently.