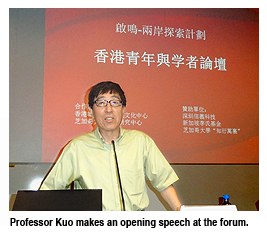 Professor Way Kuo, President of City University of Hong Kong (CityU), was invited to give an opening address titled “Cross-Strait Communications and Mission of the Youth in a New Era” at the forum of the Cross-Strait Exploration Project (CEP) on 6 August.
Focusing on the internationalisation of young people and its significance, Professor Kuo began his address with his own experience of study, research, teaching and education administration in Taiwan, the US and Hong Kong over the past decades. He made comparisons among the youth of mainland China, Taiwan, Hong Kong and even South Korea, and offered some advice on their pursuit of internationalisation.
Professor Kuo has been following the development of South Korea for decades. Citing examples in the country’s progress, he said they proved that internationalisation means much more than merely speaking English; it requires substance. In addition, good order must be part of the internationalisation process, including gradual democratisation and running society in a proper way. All young people in Greater China areas can and should play their own roles in this process, just as they would in the advance of science and technology, he argued. 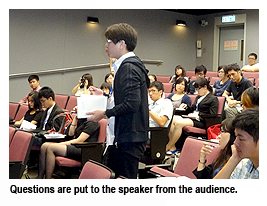 A Q&A session followed Professor Kuo’s brief opening address. During the session, he added that students should start their pursuit of internationalisation by enriching themselves in their own traditional culture, which he always encourages them to do. For instance, he would give a copy of The Analects of Confucius as a gift for his ethnic Chinese PhD students when they graduate.
Formerly known as the Cross-Strait Student Leadership Conference (CSSLC), the annual CEP takes “friendship, dialogue and understanding” as its purpose. The conference brings together 60 elite students from mainland China, Taiwan, Hong Kong, and the US to discuss various issues in which ethnic Chinese societies are interested, with a view to training the next generation of cross-strait leaders in public administration.
The 2012 CEP lasted eight days and included a five-day “Citizen Survey” in Shenzhen in Guangdong Province and subsequently a three-day forum hosted by CityU.
CSSLC came into being in 2009 at the University of Chicago in the US, when it was started by several students from mainland China, Taiwan, Hong Kong and Singapore. CityU students are among the main members of CEP’s current organising committee.
​