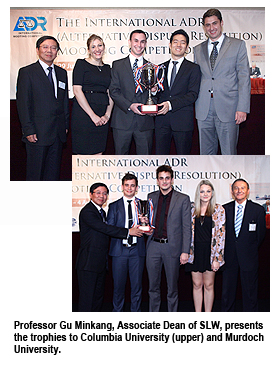 Now in its 3rd year, the competition attracted double the number of teams that took part in the first competition in 2010. Twenty teams from internationally renowned law school such as Columbia Law School, University of Vienna, Murdoch University (the Runner-up last year), Tsinghua University, and China University of Political Science and Law took part.
This innovative mooting competition was initiated by three institutions: the China International Economic and Trade Arbitration Commission, the School of Law at CityU, and Columbia Law School.
In the final on 4 August, the Columbia Law School faced off Murdoch University School of Law to become the champion with slight distance. Both Columbia University and Pan-European University from Slovakia received the “Best Team in Mediation” with their impressive performances. Will Goodheart and Liz Wreck from Murdoch University claimed the overall “Best Oralist” and the “Best Mediator” respectively.
The awards ceremony was held on the same day in recognition of the remarkable achievements of the winners and the dedication of all the participants involved.
The government in Hong Kong encourages parties to adopt mediation as a means of resolving disputes. The mediation bill, which was passed by the Legislative Council on 15 June 2012, will provide a regulatory framework for the conduct of mediation and protect the confidentiality of mediation communications.
This globally recognised competition demonstrates the active involvement of various worldwide tertiary-level institutions in and practical training for arbitration and mediation.