A forum was held at City University of Hong Kong (CityU) on 22 June for inter-sectoral discussions between local business leaders, academics and community groups on promoting a low-carbon economy in Hong Kong. 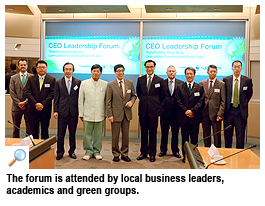 Speakers gave both local and international examples to illustrate how companies can launch sustainable low-carbon programmes and explore incentives to promote green employment.
The CEO Leadership Forum hosted jointly by CityU’s Governance in Asia Research Centre (GARC) and WWF-Hong Kong was attended by more than 80 participants from local trade and industries, business chambers and non-government organisations.
In his welcome speech, Professor Way Kuo, President of CityU, said the transition to a low-carbon economy implies new business opportunities in the longer term. “CityU is pleased to be part of this picture. The University is committed to promoting carbon emissions reduction and a green economy,” he said.
Dr Lee Tae-dong, an assistant professor at the Department of Asian and International Studies and a core member of GARC at CityU, shared his study on major factors that affect the creation of green collar jobs in the US. “If there are more financial incentives and regulatory requirements, the number of green jobs will go up,” he said.
Speakers also included representatives of some of Hong Kong’s leading companies working toward low-carbon operations.
Mr David Fong Man-hung, Managing Director of Hip Shing Hong Group of Companies, suggested that green initiatives need to be related to company operations. “We deal with environmental issues inherent to our business process, so it is not really getting out of our way to work for advancement of green management and investment,” said Mr Fong, who is also a member of the Council of CityU.
The WWF-HK presented to the audience the outcome of a survey on implementation of green initiatives by local companies. About 5% of the 151 companies interviewed have designated full or part-time staff to expand and run green operations.

For promoting sustainable development, CityU’s GARC has announced a workshop called “Climate Policies: A Guide for Local Government” on 27-28 June 2012.