CityU was named a 2012 Computerworld Honors Laureate for its barrier-free website and contributions to reducing the digital divide. The University is the only organisation from Hong Kong to receive a Laureate this year. 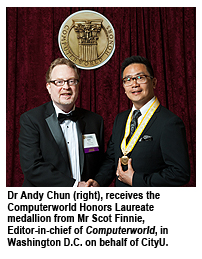 Dr Andy Chun Hon-wai, CityU’s Chief Information Officer, received the Computerworld Honors Laureate medallion at the historic Andrew W. Mellon Auditorium on 4 June in Washington D.C. on behalf of CityU.
In addition, Dr Chun received the Hong Kong CIO Award at the Hong Kong Convention and Exhibition Centre on 20 June.
The Computerworld Honors Program is a highly respected IT award in the US founded by the International Data Group in 1988. It is the longest running global programme to honour individuals and organisations that use information technology to promote positive social, economic and educational change.
CityU’s success was in the Digital Access category, established last year to raise awareness about digital inclusion. We are in the top 5 of this category, and the only organisation in Greater China to receive an award in Digital Access.
We were also a finalist in the 21st Century Achievement Award, which is handed out to one Laureate in each category of the programme.

In total, 200 Laureates from more than 25 countries were honoured this year.
CityU was acknowledged for its University-wide Web Redesign Project, an innovative mobile web technology platform that makes CityU’s entire public web, i.e. 100 websites and half a million pages, more mobile-friendly and more accessible to people with disabilities.
The new design aligns with CityU’s commitment to social responsibility, especially towards low-vision, blind or disabled users, Dr Chun explained. The CityU websites have been optimised to work with assistive technologies, such as screen readers and Braille devices.
Dr Chun said this huge IT undertaking would not have been possible without the hard work and dedication of close to 200 IT and non-IT staff across all of CityU departments and units. “Unlike other IT awards, the Computerworld Honors Laureate is dedicated purely to rewarding organisations for using IT for the good of society. It reconfirms CityU’s organisational commitment to social responsibility, too,” he said.
Mr Daniel Lai Shek-cheung, Government Chief Information Officer of the HKSAR, wrote a letter to congratulate the University, stating that the award was well-deserved recognition of the University’s outstanding contributions to the effective use of information technology for the betterment of society. 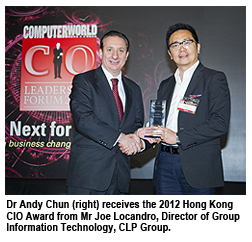 Dr Chun also won a 2012 Hong Kong CIO Award from Computerworld Hong Kong and CIO Connect for medium enterprises. He was recognised for leveraging technology to transform the University into one that is forward thinking; supporting the University’s new “Discover & Innovate@CityU” vision and culture; providing a highly learner-centric and personalised education experience; and emphasising 21st century workplace skills.
“The Hong Kong CIO Award is a great honour for CityU. Technology vision only happens with commitment and participation from everyone in the community. CityU is fortunate to have a strong track record as one of the most technologically progressive universities in the region,” Dr Chun said.
The Hong Kong CIO Awards consist of two winners: one for large enterprises and one for medium enterprises. The medium enterprise is a new category, and Dr Chun is the first CIO in Hong Kong to receive this award. Awardees are selected by an independent judging panel comprising current and former CIOs from leading corporations and organisations.