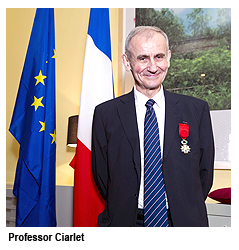 Friends and colleagues gathered at the official residence of the Consul General of France to witness the official elevation of Professor Philippe Ciarlet to the rank of Officier in the Order of the Legion d'Honneur on 5 June.
The award was bestowed upon Professor Ciarlet, University Distinguished Professor in the College of Science and Engineering, by Mr Arnaud Barthélémy, Consul General of France in Hong Kong and Macau.
The Order of the Legion d'Honneur is the highest civilian honour in France and has been bestowed upon Professor Ciarlet in recognition of his contributions to France, especially in the area of enhancing links with academic communities in Hong Kong. Professor Ciarlet has been Chevalier since 1999, and Officier is a rare promotion in the rank of distinctions. 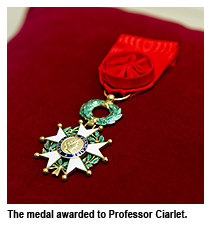 “I am deeply moved to receive this award,” said Professor Ciarlet, in the historic reception room of the 110-year-old residence, located in a leafy cul-de sac on Mount Gough. “It is indeed a once in a lifetime honour.”
In his address, he recounted his first visit to China in the winter of 1982, and his subsequent decision to take up a job offer at CityU twenty years later. “I knew when I first went to China in the early 1980s that it was the start of a special relationship.”
He thanked his family, friends and colleagues, singling out Professor Way Kuo, CityU’s President, Professor H K Chang, former CityU President, CityU’s senior management and the various Consul Generals of France for their support during his decade-long association with the University.
Professor Kuo emphasised the influential role that Professor Ciarlet has played at 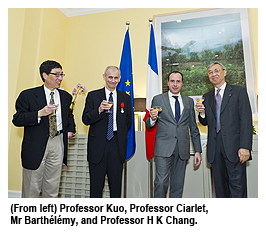 CityU, in particular his promotion of French culture and his contributions to enriching CityU’s new 4-year curriculum. “He is a perfect role-model for all of us,” he said.
Mr Barthélémy referred to Professor Ciarlet as one of France’s “most brilliant scientists” and praised him for his outstanding achievements in teaching and research.
“CityU is a top player in the booming French education,” he said, adding that there are already over 20 agreements signed between CityU and French universities. 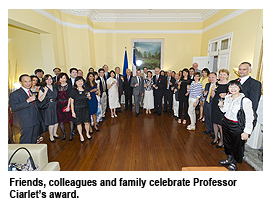 He also praised Professor Ciarlet for establishing the series of high-profile talks at CityU called the France-Hong Kong Distinguished Lecture Series under the auspices of the French Academy of Sciences and with the support of the Consulate General of France in Hong Kong, saying it has been a major achievement in boosting friendship between Hong Kong and France.
Also in attendance at the event were friends and relatives of Professor Ciarlet, members of the senior management team, current and former colleagues, fellow mathematicians, and diplomatic staff of the French Consulate General.