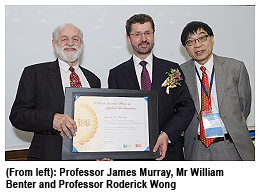 Professor James Murray, a world pioneer in applying mathematical modeling in biological and medical sciences to enhance people’s well-being, and more recently, in addressing matrimonial problems has been awarded the second William Benter Prize in Applied Mathematics by City University of Hong Kong (CityU).
Professor Murray, Fellow of Royal Society, was chosen unanimously by the Selection Committee as the winner for his unprecedented contributions to using mathematical models to address a wide spectrum of biomedical problems by understanding the underlying biomechanics of the human body for more accurate predictions of the outcome of various human interactions. His achievements have earned him the title of “the father of modern mathematical biology”.
The donor of the prize, Mr William Benter, presented the award to Professor Murray at the opening ceremony of the International Conference on Applied Mathematics 2012: Modeling, Analysis & Computation organized by the University’s Liu Bie Ju Centre for Mathematical Sciences on 28 May. 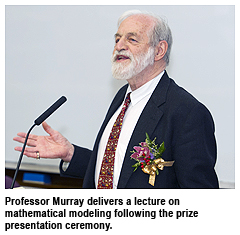 Professor Murray, Senior Scholar, Princeton University; Professor Emeritus of Mathematical Biology, University of Oxford; and Professor Emeritus of Applied Mathematics, University of Washington, has worked in a large number of diverse areas within biology, epidemiology and medicine, with the aim to help control and understand a variety of human problems.
One of his latest research projects is on the growth of brain tumours, in which his research team has developed a practical model to determine where in the brain a tumour has grown. This project will allow medical professionals to quantify the efficacy of possible treatments such as radiation, surgery, and chemotherapy for individual patients before they are used. These procedures are currently being used on patients in the Seattle area in the US.
120528_Benter_L.jpg Professor Murray has also spearheaded the applications of mathematical modeling in psychology, in particular in marital relations. He and his colleagues have developed a simple, but surprisingly accurate, predictive mathematical model which quantifies how a couple interact during a 15-minute discussion on a subject of an on-going disagreement, the subject of which they chose.
“Basically the model quantifies the interaction by using two equations, one for the wife and another for the husband. One equation measures how the wife responds after the husband speaks with the other similar equation for the husband after the wife speaks,” Professor Murray explained.
This mathematical approach provides a specific scientific marital therapy as to how a couple can modify destructive interaction styles. “The procedure is currently being used in clinical practice with very encouraging success, and the work has been extended to quantify the effect of children on marriage,” he added.
One of the most striking aspects of Professor Murray’s goals throughout his career in the field of mathematical modeling has been his determined focus on interdisciplinary research, a goal shared by CityU in its new Discovery-enriched Curriculum.
“To me interdisciplinary research is the most exciting and useful research area there is and will be for the foreseeable future,” Professor Murray said. “Such research in the past 20 years has proved groundbreaking in almost every area of the biological and medical sciences.” 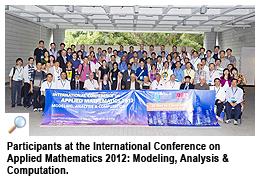 One specific area is within the social sciences. “It is, I believe, one of the next major interdisciplinary sciences,” he added.
The William Benter Prize in Applied Mathematics was set up by the Liu Bie Ju Centre for Mathematical Sciences at CityU in honour of Mr William Benter for his dedication and generous support for the enhancement of the University’s strengths in mathematics. The US$100,000 prize, given once every two years, is awarded to outstanding mathematicians whose contributions have had a direct and fundamental impact on scientific, business, finance and engineering applications.
Professor Murray said he was greatly honoured to receive the prize. “The William Benter Prize is unique in that it is for genuine applied mathematics—the use of mathematics in the real world. CityU, and particularly the Liu Bie Ju Centre under Professor Roderick Wong Sue-cheun, Centre Director, is known for its truly practical use of mathematics in the broad sense,” he said.
Professor Roderick Wong, who is also Vice-President (Development and External Relations) at CityU said the University was proud to have established this award to recognize and promote the importance of genuinely applied mathematics.
“Professor Murray is an exemplar of success. His achievements have demonstrated how mathematics and its applications in other disciplines contribute to improving human life and the world,” he said.
Following the prize presentation ceremony, Professor Murray delivered a lecture titled “Modeling in the biomedical and social sciences: from animal coat patterns to brain tumours to saving marriages” which kicked off the five-day conference.