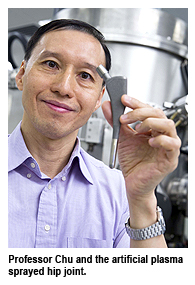 A chair professor in the Department of Physics and Materials Science at City University of Hong Kong (CityU) has won the First Class Award in the Shanghai Science and Technology Awards 2011 presented by the Shanghai Municipal People’s Government.

Professor Paul Chu Kim-ho was commended for his achievements in using plasma technology for the surface modification of titanium alloy for making artificial pelvises, facilitating the growth of patients’ bone cells, and reducing their recovery time.

His research concentrates on the study of fundamental theories of plasma ions and ion implantation as well as applications of plasma technology to semiconductor and biomedical materials. In his collaboration with the Shanghai Institute of Ceramics at the Chinese Academy of Sciences, he studied how to use plasma technology to improve the surface characteristics of titanium alloy for making artificial hip bones.

The human body sometimes rejects titanium alloys used for artificial joints if the bone tissue and the implant fail to combine. Professor Chu studied the surface characteristics of titanium alloy and found that the application of biological calcium silicate coatings of high-strength bonding to the surface of the alloy can facilitate the growth of new bones, making artificial pelvises more durable. His findings have boosted research on calcium silicon materials in biomedical applications.

His laboratory experiments showed that a six-micron layer of human bone tissue formed on the surface of titanium alloy that had been treated by plasma technology and immersed in simulated body fluid for two weeks. The layer of tissue had grown to 27 microns two weeks later.

Professor Chu’s new method of nanocrystalisation for the surface of titanium alloy can enhance the surface characteristics of materials, improve the biological activity of the alloy, and reduce the chances of rejection.

His research findings have been cited by many renowned international scientists and researchers. Some of his projects have received funding from medical equipment corporations for further application development.

The annual Shanghai Science and Technology Awards were set up by the Shanghai Municipal People’s Government in 2007 with five categories of prizes. Professor Chu, the only Hong Kong scientist to have won First Prize in the category of natural science, said he felt honoured to receive the prize.

“CityU encourages academic staff to conduct applied research for the well-being of society. I am delighted that my research has received recognition by Shanghai municipal government,” he said. 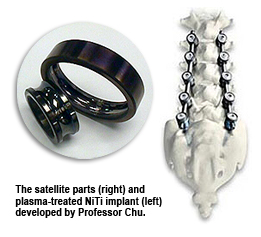 Professor Chu has also developed a range of advanced technologies, including plasma-based orthopedic NiTi shape memory alloys for correcting spinal deformities, which has been used in clinical treatments.

In addition, he has improved the durability of satellite parts, reducing wear and tear, and produced the first silicon-on-insulator (SOI) wafers by plasma implantation. SOI increases the operational speed of computer notebooks and mobile telephones by up to 30%, and has been manufactured in the US.

Professor Chu, among his many accolades, has been ranked by the Web of Science as the number one researcher in Hong Kong every year since 2006. He is ranked 100 out of 400,000 people worldwide in materials science by Essential Science Indicators.

Under his leadership, the CityU Plasma Laboratory has published more than 1,000 international papers and holds 12, 7 and 1 patents in the US, the mainland and Europe respectively.