Materials have been essential to the development of human societies ever since people during the Stone Age first began crafting rudimentary tools out of rock fragments. 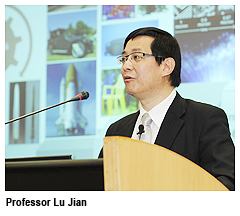 Today in the Information Age the materials required need to be small, stronger, more efficient and more applicable, according to Professor Lu Jian, Chair Professor of Mechanical Engineering, Dean of the College of Science and Engineering, and Director of the Centre for Advanced Structural Materials at City University of Hong Kong (CityU) on 19 April.

Professor Lu, who was recently elected as a Fellow of the National Academy of Technologies of France, was giving a talk titled “Achieving High Strength and High Ductility Nanomaterials: Concept, Properties and Applications” at the President’s Lecture Series: Excellence in Academia. It was the 10th talk in the series.

In his talk he said future trends in science, engineering and technology will see the development of materials and structures with nano-, micro- and macro-scale functional gradients for generating different toughening mechanisms.

“The multi-scale experimental and simulation tools developed are the major keys for understanding, designing and achieving high strength and high ductility materials,” he said. 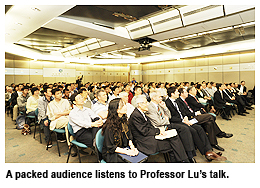 The challenge for steelmakers, for example, in the pursuit of safety and energy efficiency is creating novel materials that are strong and ductile, but it is these qualities that manufacturers are currently seeking, especially within the light vehicle industry.

But the problem is that strength and ductility are often in conflict with each other in the development of a new generation of advanced high-strength steels, as ultra-strong materials can be prone to fracture and crack. Large-scale formation is also problematic.

“Another key problem for integrating the nanostructured materials and BMGs [bulk metallic glasses] for structural applications is its poor ductility and the difficulty to form the material at a large scale,” Professor Lu said.

However, experimental data collected by Professor Lu and his team suggests that surface nanocrystalline treatment can create superior surface properties against wear, corrosion, fatigue, and tends to be cheaper and more effective that bulk nanocrystalline approaches.

The technique used synthesises a nanostructured surface layer on metallic materials in order to upgrade the overall properties and performance. The applications of such new materials include energy-saving light weight vehicles, wind energy structures and the nuclear energy industry.

“By changing roof structure material (in vehicles) from the conventional steel to UHSS [ultra-high-strength steel], the load carrying capacity can be immediately increased by 3 to 4 times,” Professor Lu said in reference to the car industry.

There are also applications in medicine, for example in the creation of cardiovascular implants, he said. 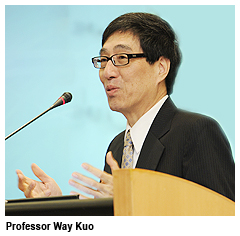 Professor Lu, one of four members at CityU of French academies, as Professor Way Kuo, University President, pointed out in his introductory remarks, ended his talk with some thoughts on research aimed at students in the audience, on greater collaboration between scientists and engineers, and on barriers between theoreticians and experimental experts in the field.

Professor Lu received his PhD in Materials Science and Applied Mechanics from the University of Technology of Compiegne in France in 1986. He is an expert in the integration of advanced materials and processing through computational simulation and computer aided design; mechanical characterisation and processing of nanomaterials and advanced structural materials; and experimental mechanics and residual stress.