The 18-month-long “Zero Food Waste in CityU” campaign newly launched at City University of Hong Kong (CityU) will promote environmental protection and a greener campus by encouraging students and staff to reduce and reuse food waste. 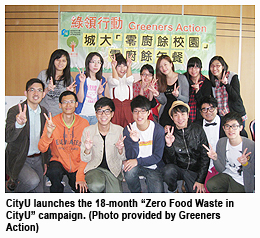 The campaign, the first of its kind among local tertiary institutions, is sponsored by the Environment and Conservation Fund, and it was initiated by CityU and Greeners Action.

The objective is to eliminate food waste that would otherwise be dumped in landfills and thereby cut related environmental problems such as sewage leakage and the emission of the greenhouse gas methane. The organisers also hope to develop a model for other institutions’ reference by categorising sources of food waste for processing and reusing.

The campaign continues the reduce food waste campaign launched by CityU a year ago and represents CityU’s commitment to social responsibility. 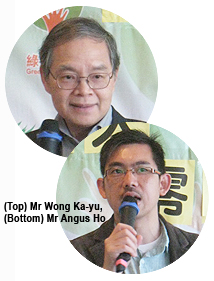 The University has introduced a series of measures to reduce food waste, according to Mr Wong Ka-yu, Director of the Campus Development and Facilities Office. These initiatives include a $1 rebate to customers ordering smaller rice portions, cutting buffet salad bars and providing six-course low-carbon banquets. To support the campaign, all eating outlets at CityU will categorise sources of food waste and process the reusable waste into animal feed or soil fertiliser.

CityU has been collaborating with a recycling agent since last August on processing food waste into fish feed. This measure has the benefit of reusing food waste and minimising the usage of landfills.

“The project is the first of its kind among local tertiary institutions aimed at eliminating all food waste on campus,” said Mr Angus Ho Hon-wai, Executive Director of Greeners Action. “To cut 500 kilogrammes of food waste produced daily on campus, we need the support of the students, the University and the eating outlets. We hope this campaign will encourage other tertiary institutions to help young people develop a sense of cherishing food.” 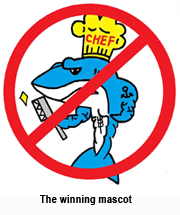 More than 10 CityU students were recruited as Save Food Ambassadors to promote the importance of reducing, categorising and reusing food waste on campus at all eating outlets. In addition, a Design Competition for Zero Food Waste Mascot was set up. Lee Chung-hin, a Year 2 student from the Department of Management, won with his design of a shark mascot at a ceremony on 29 March.

Other activities in the campaign include the Save Food Day for Academic Institutions, Actions for Categorising Sources of Food Waste at Canteens, and CityU Week for Zero Food Waste.