A field station in the Mojave Desert in California more accustomed to environmental scientists welcomed some unusual visitors in March: 15 students from the School of Creative Media (SCM) equipped with sensors and technological tools. 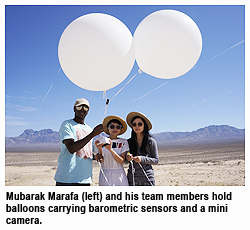 These City University of Hong Kong (CityU) students had come to the desert to read nature and climate change in a totally new interdisciplinary way. Their plan was to create new media art out of the data they collected on temperature, altitude and wind direction at desert sand dunes, a dry lake and a canyon in the desert. The new works will be exhibited at CityU in May.

The wild, harsh desert landscape is the perfect place for this project, according to Mr Scott Hessels, project supervisor and an associate professor at SCM.

“The art that our students make when they engage directly with a really extreme environment will have more resonance and connect with more people,” he said.

The Mohave Desert, characterised by searing daytime temperatures, freezing night conditions and strong seasonal winds, is not an easy place to work. Some students trekked two hours through the sand and heat to find a suitable location for their field work. 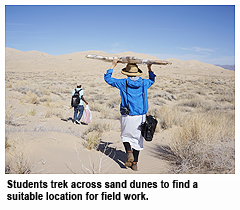 Sometimes the unexpected happened. SCM student Mubarak Marafa had to search in the sand for a camera that fell from a flying balloon that was taking aerial images of the desert. “The search took about half hour but it felt like three hours,” said Mubarak, who eventually located the camera.

Despite the heat and sweat, the students were delighted by what they saw and the people they met.

“The most beautiful moment was when I climbed the Kelso Dunes,” said Stephanie Mak Ying-tung, referring to the famed sand dunes in the Mojave Desert.

“A personal highlight for me was staying in the desert alongside the scientists, sharing the same facilities and resources and inspiring each other,” said Verena Henn, adding that the scientists were fascinated that the students were doing such work with the environment.

Students also visited top scientists at the California Nanosystems Institute (C(N)SI), part of the University of California, Los Angeles; the Center for Land Use Interpretation; and the Getty Conservation Institute in Los Angeles. 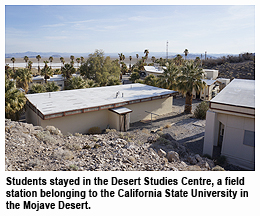 In his laboratory at C(N)SI, nano scientist Dr Adam Steig talked to students about his experience collaborating with artists on projects that visualised difficult science concepts and theories. “The artistic process actually informs the scientific process,” he said.

The desert trip is a key component in a new SCM undergraduate programme on media art and the environment. SCM will also launch a new bachelor’s degree in arts and science in new media in September 2012.