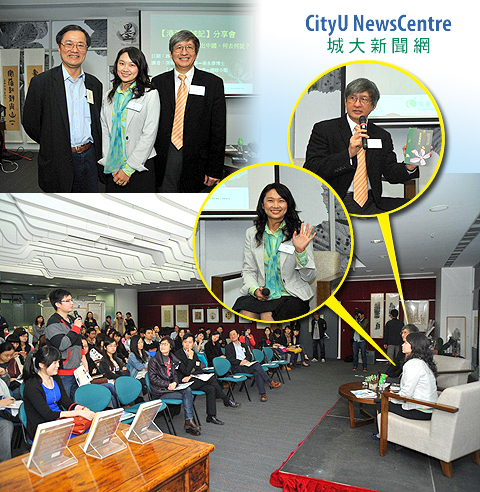 A sharing session organised by City University of Hong Kong (CityU) Press, the Run Run Shaw Library and Breakthrough, an NGO providing cultural and educational services for young people, focused on the identity crisis and culture shock that some mainland students experienced while studying in Hong Kong.

About 70 teachers and students attended the event, which was co-hosted by Dr Leung Wing-tai (top right), General Secretary of Breakthrough and CityU’s Honorary Fellow, and Ms Zihona Zhao Han (top middle), author of the book Lost and Found in Two Cities: A Journal of a Young Beijing Elite, on 15 February.

The two speakers chatted to participants, mostly from the mainland just like Zihona, about cultural differences, identity, attitudes, and the relationship between career prospects and the future of the nation.