City University of Hong Kong’s (CityU) Run Run Shaw Library has recently received 50,000 items of rare contemporary and modern Chinese books, journals and documents donated by Mr Gabriel Yu Chi-ming, founder and Chairman of iTVentures Group of Companies and CityU’s Honorary Fellow, and his wife, Mrs Teresa Yu. The items will be permanently preserved after technical processing and serve as reference materials for academics and researchers.

To recognise the donation, the CityU library has organised a Book Donation Ceremony cum Exhibition: “Treasures of China before & after 1949” from Mr Gabriel Yu Chi-ming and Mrs Teresa Yu, which opened on 19December 2011. The exhibition displays a selected collection of books, journals and documents with unique characteristics, including title deeds dating back to the reign of Guangxu of Qing dynasty; Ba Jin liu shi nian wen xuan : 1927 - 1986 (Collection of Essays by Ba Jin in Sixty Years: 1927 - 1986), autographed by the author Ba Jin; tabloids and photographs from mainland China dating back to days of the Cultural Revolution; and notes by the renowned historian Wang Yuquan. CityU staff and students as well as the public are welcome to the exhibition and take a look at the rich mass of literature generously donated by Mr and Mrs Yu.

Professor Ellis said in his remarks, “This donation by Mr & Mrs Yu not only expands our library’s existing Chinese collection, but extends its time span from the late Qing era to the early 20th century. This book collection will greatly enhance our library resources in learning, teaching and research and contribute to our culture of discovery and innovation at CityU.”

This donated collection of books and journals was originally collected by "Antiquarian Novels Club” which deals in different kinds of old books, journals and records, operated by Mr Wong Chi-ching. It was later purchased as a full lot by Mr Yu, who has given it to CityU library as a gift. The collection includes publications from the times of the Qing dynasty. Books and journals published in the two periods of 1911-49 and 1949-80 are especially uncommon and difficult to find. The collection covers a broad spectrum of subjects, among which literature, history and philosophy are the dominant areas. It consists of books and magazines dating back to the initial period after the establishment of the Republic of China. Several literary works, renowned writers’ manuscripts and autographed copies, as well as tabloids, cartoons and photos, etc. that appeared during the Cultural Revolution are included in this magnificent collection. These items are not commonly found in general libraries. Exhibits with special features include title deeds of the Guangxu period in the days of Qing dynasty, notes and maps belonging to contemporary literati, etc. Besides enriching CityU library’s collection on literature, history and philosophy, this batch of books, journals and other publications is expected to provide scholars and later generations information crucial for understanding social, economic and cultural conditions at the time and conducting research on related subjects. 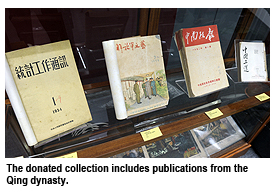 Professor Steve Ching remarked that preserving and passing down Chinese civilisation is undoubtedly the key responsibility of the library. "We will participate in saving and protecting these rare books, and, at the same time, be committed to promoting the knowledge and culture embedded in this precious collection to support the teaching and academic research of the university,” he said. “We will do our best to contribute to the nurturing of competitive talents for the 21st century.”

Mr Yu regards facilitating preservation and passing down of history of the Chinese civilisation as his personal responsibility. He has been highly praised for Wen yuan ge Si ku quan shu dian zi ban (Digital Four Treasuries of Complete Collection of Chinese Books of Wenyuange Edition), which is open to public use and is generally regarded as a mammoth undertaking in the field of Chinese digital publishing. For a long period of time, Mr Yu has endeavored to support CityU’s development. On many occasions, he has made donations to set up scholarships to finance students in need. He is CityU’s adjunct professor and has been a member of the Court since 2007. To promote Dunhuang artistic culture in the Hong Kong community, Mr Yu planned and provided financial support for the “Inside Dunhuang” project implemented by CityU. This project has driven the development of teaching and research on multi-media creations at CityU. In this connection, CityU bestowed an honorary fellowship upon Mr Yu, to commend his manifold contributions to CityU’s development.

Since receiving the rare books, journals and documents on 1 December 2011, the CityU library has used special technology to process the items and has ensured that they are stored at constant temperature and humidity. UHF RFID security system is used for tracking their movement and ensuring preservation. In addition, the library has taken up compilation of bibliographical information and digital processing of these books, journals and documents. It is hoped that the life span of this treasure trove of textual materials would be extended because of these steps. Convenient on-line search and usage would be offered and this batch of textual materials would be perpetually preserved at the CityU library.

The exhibition runs from 19 December through 4 January, 2012. Exhibition venue is the CityU library.