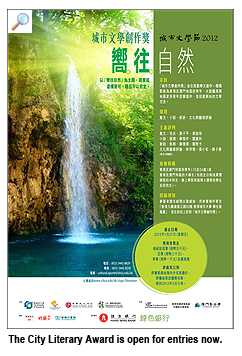 “We believe that only when you know how to appreciate nature will you truly fall in love with it. We hope to promote this kind of awareness on the city and the campus so that the love for nature will grow naturally in our city,” Professor Cheng said.

CityU, which promotes literary activities and development in the region, has hosted the City Literary Festival and City Literary Award for six consecutive years. The aim is to encourage young people in Hong Kong and Macau to cultivate their talent and bolster literary exchanges between the two cities. Young writers can submit their entries to the competition in four different categories: prose, short story, poetry, and art and cultural criticism. The top three winners of each category will receive cash prizes of $5,000, $3,000 and $1,000 respectively, and outstanding entrants will be honoured with merit awards.

Students in tertiary institutions and youngsters between the ages of 15 and 24 in Hong Kong and Macau can submit their entries on or before 27 January 2012 (Friday). The results will be announced in May 2012.

The festival and the award are organised by CityU’s Cultural and Sports Committee, the Chinese Civilisation Centre, and the Department of Chinese, Translation and Linguistics. They are co-organised by the Hong Kong Arts Development Council, the Chinese Language Education Section of the Curriculum Development Institute at the Education Bureau and Macao Foundation. Hang Seng Bank is the sponsor.

In addition, CityU and the Education Bureau will organise once more the seminar “Dialogue with Writers” in April 2012, providing an opportunity for local secondary school students to exchange ideas in person with the adjudicators.

For details of the City Literary Festival 2012 and the 7th City Literary Award, please visit http://www.cityu.edu.hk/ctspc/literature or call 3442 8029.