Researchers at City University of Hong Kong (CityU) have found that an artificially constructed wetland can remove up to 90% of pollutants in wastewater.

This highly efficient and cost-effective wastewater technology can be applied in sewage treatment plants and reservoirs and to deal with algal boom that may cause red tides. 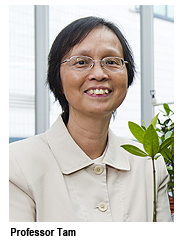 “The quality of the wastewater treated by our system meets national standards and can be released into Deep Bay, for example, or used for watering plants,” said Professor Nora Tam Fung-yee, Chair Professor of the Department of Biology and Chemistry and Director of the Futian-CityU Mangrove Research and Development Centre (FCMC). “The constructed wetland can help green the surrounding area, too.”

The research conducted by Professor Tam and her team shows that mangroves can absorb large quantities of nutrients and remove suspended solids (over 90%), nitrogen (60 to 90%) and phosphorous (70 to 90%).

It was also found that microorganisms in the soil and at the roots of the mangrove plants contain bacteria that can decompose nitrogen pollutants. Professor Tam’s research team successfully incubated the bacteria in the laboratory and it can be used now in sewage treatment plants and reservoirs and to reduce algal boom.

The research was conducted at a 400-square-metre wetland specially constructed in the Futian Nature Reserve at the FCMC in 2003. The Centre has received nearly $3 million from the national government to conduct research pertinent to the environment and ecology. 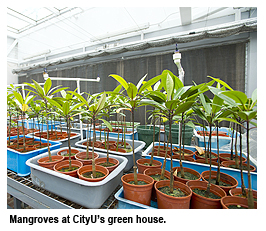 The research findings are significant because the large quantities of nutrients and suspended solids that the artificial wetland can remove are harmful to the environment. The suspended solids include silt, organic compounds, algae and microorganisms. The nitrogen pollutants come mainly from human and animal excrement and chemical fertilizers, and the phosphorous pollutants are generated primarily by detergents and chemical fertilizers. Excessive levels of nitrogen and phosphorous in water accelerate the growth of algal bloom, a process which in turn consumes oxygen in the water and kills fish.

As a result of the research, Professor Tam collaborated with Xiamen University two years ago to build a wastewater treatment system at a constructed wetland in Longgang District in Shenzhen for processing wastewater and greening the local environment.

In a related project, Professor Tam and her research team studied the resources needed for the growth of local and foreign species of mangroves in the Futian Nature Reserve. They found that plants growing rapidly with few resources are very likely invasive species that will threaten the growth of other plants.

As Sonneratia caseolaris (red-flowered apple mangrove) and Sonneratia apetala (firefly mangrove) were found to be the foreign species of mangroves that require the least amount of resources for growth, they should be reduced as far as possible, the team concluded. Bruguiera sexangula (upriver mangrove) and Rhizophora stylosa (long-style stilt mangrove), though also foreign species, need more resources and pose a relatively minor threat to other plants.

Professor Tam’s “Constructed Mangrove Wetland for Sewage Treatment” and “Study on Resources Used by Mangroves” were among five research projects from CityU that earned Excellent Product Awards at the 13th China Hi-Tech Fair. 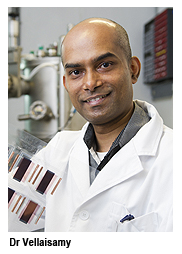 Dr Vellaisamy found that solar cells made from polymer nano-composite materials have a similar efficiency rate to those made from amorphous silicon when converting sunlight into energy but that the cost can be reduced by about 50%, as it takes less than US$0.5 to generate 1 watt of electricity using polymer nano-composite solar cells. Since the new material is flexible, light, thin and transparent, it can be used on windows for energy harvesting.

Flexible organic RFID tags can be produced easily by printing and they are inexpensive. With the benefit of enhanced identification as sensors, they could be used in the quality control of food products. This saves consumers from food poisoning. 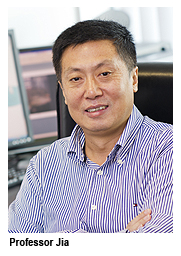 Professor Jia’s 3G Real-Time Surveillance Cloud Service System can allow users to perform real-time surveillance, the remote control of cloud system, the retrieval and playback of videos and the transmission of alarm signals. Users of mobile phones, flat panel or personal computers have a choice of fixed-line networks, WiFi and 3G communication network to perform the above tasks, without the need to build a wired network.

The largest technology exhibition in the mainland, China Hi-Tech Fair was held at Shenzhen Convention and Exhibition Center from 16-21 November this year, attracting around 3,000 organisations from all over the world. Through the collaboration of the Knowledge Transfer Office and the CityU Shenzhen Research Institute, the University showcased 23 new high-tech products at the Fair.