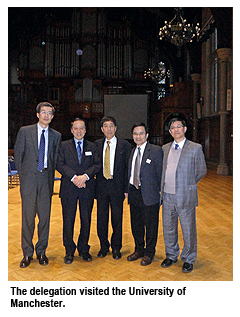 A top-level delegation of officials from City University of Hong Kong (CityU) discussed the development of programmes related to energy issues and the establishment of student exchanges with key personnel at prestigious universities and research centres in the UK and France on a recent visit.

Led by Professor Way Kuo, President of CityU, the delegation focused on establishing collaborative relationships in the areas of nuclear and risk engineering and energy and environmental science at the University of Manchester in the UK on 18 November. 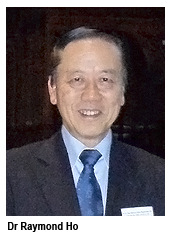 During the visit, Professor Kuo outlined CityU’s strong commitment to internationalisation, and his counterpart, Professor Dame Nancy Rothwell, President and Vice-Chancellor of the University of Manchester, agreed that closer ties would benefit both institutions.

One of the CityU delegates, Ir Dr the Hon Raymond Ho Chung-tai, CityU Court member and a member of the Legislative Council of the Hong Kong SAR since 1996, spoke about the development of CityU’s new nuclear and risk engineering programme, highlighting the importance of training nuclear safety personnel in Hong Kong. As an outstanding alumnus of The University of Manchester, Dr Ho was made an Honorary Doctorate of Law by his alma mater in 2001 and the conferment ceremony was held in Hong Kong to facilitate his busy schedule.

Three days later, the delegation discussed collaborations in faculty research and graduate training and internship with senior officers at the Atomic Energy and Alternative Energies Commission (CEA), a leader in research, development and innovation. CEA, active in low-carbon energies, defense and security, information technologies, and health technologies, said it welcomed PhD students from CityU to conduct research in its world-class laboratories, and Professor Lu invited CEA scientists to CityU to teach and conduct research. After the meeting, the CityU delegation visited one of CEA’s top facilities. 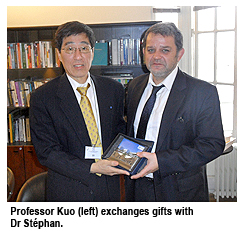 While in Paris, the CityU delegation met with Dr Ronan Stéphan, General Director for Research and Innovation at the Ministry of Higher Education and Research. Dr Stéphan expressed strong interest in promoting research collaboration between CityU faculty members and their French counterparts, adding that his team would identify relevant research areas.

On the final leg of the visit, on 22 November, the CityU delegation discussed issues facing higher education institutions in the UK, Hong Kong, and other parts of the world with Sir Keith O’Nions, Rector of Imperial College, the UK’s leading institution in science, engineering, and medicine.

Talks were also held with heads of the Department of Mechanical Engineering, the Energy Futures Lab, and the International Office about establishing faculty research collaborations, student exchanges, and special degree programmes, such as 2+2 or 4+1, between the two institutions.