It wasn’t just language we learned from our six-week summer programme in the UK. 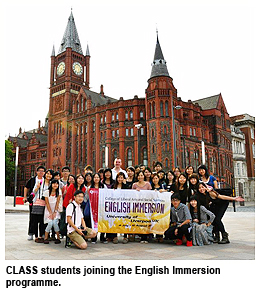 A total of 34 of us from the College of Liberal Arts and Social Sciences at City University of Hong Kong (CityU) were also given a good opportunity to understand the British culture during the English Immersion Scheme.

Instead of studying grammar books, we spent the first four weeks attending lectures at Liverpool University on a range of topics, from history and art to science and technology.

We gained insight into how the city developed and how British people used to live, for example, learning about the history of slavery in Liverpool and about famous local architecture.

We had four tutorial days a week, allowing us to have three days off to carry out the assignments and explore Britain. The knowledge we gained from the classes reflected one aspect of local culture, and we gained greater understanding through university-organised activities and self-guided tours.

We visited cathedrals, museums, galleries and cultural vestiges, learning about how British people have lived in the past and now. We also had time to tour Scotland, Wales and Northern Ireland. The unique customs in different places around Britain left a tremendous impression on us. 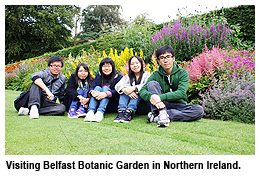 In the last two weeks of the scheme, we were assigned a research project to get to know British culture in-depth. The topic for our group was the history of slavery in Liverpool, a very challenging theme.

We encountered some difficulties, but as a team with high spirits and commitment, we tried many ways to solve the problems. The whole team supported each other like one big family.

In the last few days of our trip, we heard that the disturbances in London had spread to other cities including Liverpool. Our College reacted very quickly, giving us instructions on how to cope with the situation. On 10 August, the second day after the riots broke out in Liverpool, our Dean met us in person and helped to make arrangements to ensure our safety. I feel very grateful to the College and the Dean for their high levels of care and concern.

The English Immersion Scheme is an unforgettable experience for us and it will certainly facilitate my future education and career.