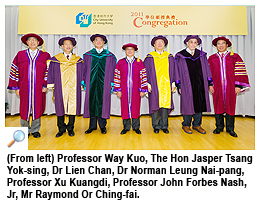 City University of Hong Kong (CityU) conferred honorary doctorates on four prominent individuals at the Honorary Awards Ceremony on 8 November in recognition of their significant achievements and contributions to the well-being of society. Dr Norman Leung Nai-pang, University Pro-Chancellor, presided over the ceremony.

Dr Lien, Honorary Doctor of Social Science, is a distinguished statesman. He taught at universities in the US and Taiwan before starting his political career. He has held many important posts in the Kuomintang and Taiwan government, and has become a major influence over academic and political life in Taiwan, contributing significantly to Taiwan across a range of subjects, including science and technology, public finance, diplomatic affairs, culture and education, social welfare, and environmental protection. 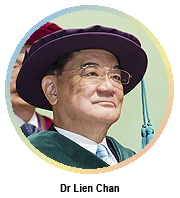 Now Honorary Chairman of the Kuomintang and Chairman of the Board of Directors of Lien Chan Foundation for Peace and Development, Dr Lien has made historic contributions to promoting peace across the Taiwan Strait, not only by encouraging cooperation between the Kuomintang and the Chinese Communist Party, but also by promoting friendly relations between Taiwan and the mainland.

Professor Nash, Honorary Doctor of Science, is a mathematical genius. He wrote a dissertation titled “Non-Cooperative Games” for his doctorate in which he presented his concept of equilibrium for non-cooperative games. The paper impacted the development of game theory and established the foundation of modern economics. 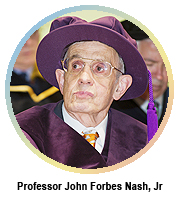 His discovery, known as the “Nash Equilibrium”, moved game theory to a new plane. In addition to setting a new paradigm for mathematics and economics, it has influenced the military, political science, psychology, sociology, evolutionary biology, and many other disciplines.

He has conducted groundbreaking work in many areas of mathematics, profoundly influencing differential geometry, real algebraic geometry and partial differential equations. In addition to the Nobel Prize in 1994, he was awarded the John von Neumann Theory Prize and the Leroy P Steele Prize. He received an Honorary Doctor of Science and Technology from Carnegie Mellon University and honorary degrees in economics from several universities. At the age of 83, he is now Senior Research Mathematician in the Department of Mathematics at Princeton University, and continues to venture forth in mathematical research.

Mr Tsang received an Honorary Doctor of Laws. He began his 28-year-long career in education after graduating from university, nurturing generations of talented students to contribute to Hong Kong. He took up teaching at Pui Kiu Middle School and was later appointed principal. He was also a Council Member of the Open University of Hong Kong and a Member of the Standing Committee on Language Education and Research. In his years working as an educator, he came to realise the 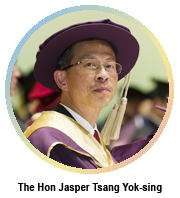 unparalleled value of education, and that tolerance and cooperation are essential qualities for a good leader.

In 1992 he helped found the Democratic Alliance for the Betterment and Progress of Hong Kong, acting as Chairman from 1992 to 2003. He served in numerous public positions, such as a Non-official Member of the Executive Council of the HKSAR; a Member of the Commission on Strategic Development; and a Board Member of the Airport Authority.

He has time and again proposed to the Government the need for developing comprehensive cooperative ties with the mainland and a permanent mechanism with wide powers and multiple responsibilities. He has also led a number of delegations of Legislative Councillors on visits to the mainland to foster a more cooperative relationship between Hong Kong and the mainland. 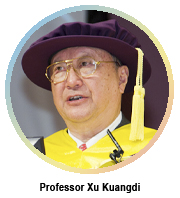 Professor Xu, Honorary Doctor of Engineering, is an internationally renowned engineer in metallurgy. He is also an Academician of the Chinese Academy of Engineering and a Foreign Member of academies of engineering in the UK, US and other countries. The impact of his achievements in the fields of electric steel-making, jet metallurgy, secondary refining of liquid steel and smelting reduction has been felt internationally.

From 2002 to 2010, Professor Xu served as President of the Chinese Academy of Engineering. Under his leadership, China’s engineering experts generated a stream of innovative ideas and provided strategic consultation for the rapid development of the country’s economy across a range of core industries, such as aerospace and aviation, modern means of transport, electronic communication, materials, national defence, energy resources, agriculture, and medicine. He has also promoted energy-saving and green industries to ensure China’s sustained development in the future.

Professor Xu has received numerous awards in recognition of his achievements and contributions to the promotion of friendly relations between China and other countries, including the Ho Leung Ho Lee Science and Technology Progress Award, the China-Europe Friendship Award at the Hamburg Summit, and the German-Chinese Friendship Award. Professor Xu has served in many national positions. He was the Mayor of Shanghai, Vice-Chairman of the 10th National Committee of the Chinese People’s Political Consultative Conference, and is currently Honorary Chairman of the Chinese Academy of Engineering.

In his note of thanks, Professor Xu said, “City University of Hong Kong is now proudly ranked among the world’s best universities, having distinguished itself among Asian as well as international universities, and producing a host of elite professionals in various fields for both Hong Kong and mainland China. It is indeed remarkable that this has all been achieved in such a short span of time.” He added that hard work is the means to the realisation of ideals, and great achievements are the result of cumulative efforts. No one can achieve success and contribute to society if they do not endeavour to do better and better, he said, and it is the spiritual force of perseverance that enables one to resist temptations, overcome hardships and achieve ambitions. 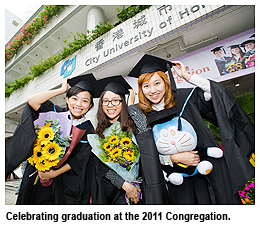 “The programmes taught at CityU encourage students to care about the world around them, to live in and for their communities, with a view to create students with a high sense of moral duty and a genuine concern for the welfare of others,” he said.

He encouraged graduates to learn from the four outstanding honorary doctorate recipients and create applicable knowledge in order to support social and economic advancement.

Kevin Yuen, one of the first cohort of graduates from the Bachelor of Arts (Honours) in Media and Communication, represented the graduates. In his speech, he said “If there is no one out there to help us, we must clear the path ourselves, work doubly and triply harder than the others. I believe only through hard work and good work can we earn the respect that is due to us.” He considered this an opportunity to challenge his will and test his competence.