The most populous country on earth, China is undergoing rapid industrialisation and urbanisation, said Professor Xu Kuangdi, Honorary Chairman of the Chinese Academy of Engineering, in his talk “Advances in Science and Technology Boost Green Development” on 7 November at City University of Hong Kong (CityU). 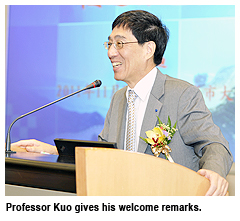 Professor Xu’s address covered a number of energy-related issues on the mainland. The construction areas of cities and towns will double by 2030, he said, comparable to building another China; and with coal as the major energy source, China has become the world’s biggest CO2 emitter.

Although far behind developed countries in terms of per capita emissions, China must adjust its development mode, he said. 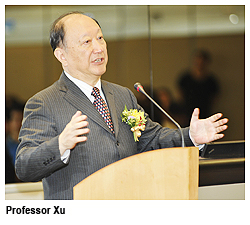 China is now working hard to reduce its coal consumption, and at the same time, readjust its energy structure and develop nuclear and renewable energy in order to build a low-carbon community, he added.

Another issue concerned coal: China’s consumption increased five-fold from 1949 to 2008. “At the end of 2010, China installed ultra-supercritical units (power generation units with lower coal consumption) that can generate 57,700 MW, saving more than eight million tons of coal and reducing about 21 million tons of CO2 emissions per year,” he said.

In terms of developing a cyclic economy, Professor Xu explained how Shougang Jingtang United Iron and Steel Co. Ltd. generates electricity and desalinates seawater using waste gas produced during the manufacturing process and how it produces construction materials with slag from iron and steel refining.

China is making diligent efforts to develop advanced manufacturing technology, too. It tries to reduce consumption and improve efficiency by employing the Internet of Things, which not only works well for the logistics industry but also smart grids and smart transportation.

An expert in iron and steel metallurgy highly regarded in China and overseas, Professor Xu has received numerous awards for his work in electric steel-making, jet metallurgy, secondary refining of liquid steel, and smelting reduction. 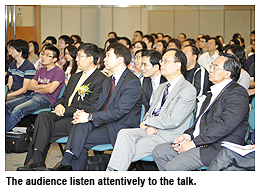 From 2002 to 2010, as President of the Chinese Academy of Engineering, Professor Xu and a group of engineering experts set development policies and nurtured talent for core industries and promoted energy saving and green industries for sustainable economic development.

In addition, he has served as the Mayor of Shanghai, Vice-Chairman of the 10th National Committee of the Chinese People’s Political Consultative Conference and Deputy Director of the State Council Academic Degrees Committee.