At the heart of the DEC

The transformational energy currently being injected into the curriculum at City University of Hong Kong (CityU) was underscored in the title of the latest talk in a specially commissioned series of lectures. 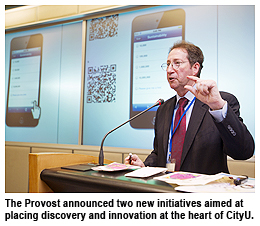 In “Re-defining the Teaching-Research Nexus: Building the CityU Discovery-enriched Curriculum [DEC]”, CityU’s Provost, Professor Arthur Ellis, presented on 12 September an overview of the DEC and what it means for the CityU community and its stakeholders.

“This is an historic time for CityU, Hong Kong and for the international community,” said Professor Ellis, the member of the senior management team who leads academic and associated development at CityU.

“The DEC represents a different kind of paradigm for bringing together research and education. If we think about the events that are unfolding, in particular the transition to the 4-year curriculum, this is an appropriate time to think about where we want to be going as an institution,” he said.

Under the DEC, all students will have the opportunity to create, communicate, curate and cultivate new knowledge as part of their studies. During his talk, part of the President’s Lecture Series entitled “Excellence in Academia”, the Provost discussed how CityU will encourage students to pursue discovery and innovation, and how staff can insert greater degrees of creativity into the “DNA” of the curriculum. 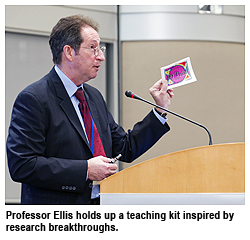 For perspective, Professor Ellis reminded the audience of the rapid advances in technology that have transformed classroom teaching over the past 25 years, revealing how discoveries in the research field have quickly found a place in campus lecture theatres and laboratories. These transformations have allowed teachers to encourage students to work toward the ultimate goal of being creative within an area of scholarship, he said.

He cited the discovery of superconductivity in ceramic materials in 1986 by scientists who won the Nobel Prize for Physics the following year as a major breakthrough that led to developing a relatively simple experiment to be used in the lecture theatre to teach complex ideas about atomic structure.

Thus, he said, research and technology have dramatically altered what lecturers can achieve in classroom settings, moving away from the “stand and deliver” method of the past to more interactive, collaborative, time-sensitive and collective experiences.

In a hands-on demonstration, Professor Ellis gave the audience a flavour of what was possible by having all those present participate in three iPod Touch activities. One activity offered instant feedback on the CityU website design; another was a straightforward question about the use of paper by students at CityU; and the last was an invitation to send a question to the Provost about his talk. 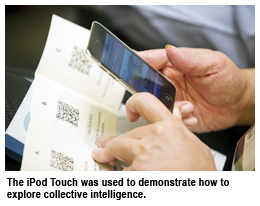 “Mobile technology will play an increasingly innovative role in education as students will be able to work with anyone, anywhere, anytime on anything,” Professor Ellis said.

To drive forward this new spirit of curricular change and more creative use of classroom time, two new initiatives supported by the President and Provost have been established, Professor Ellis said. A HK$3 million fund will be used to kick-start the Gateway Education Discovery Lab in Academic 1 where students and staff can create, test and communicate ideas using new state-of-the-art facilities. The Office of the Education Development and General Education (EDGE) will oversee the project.

In addition, a HK$5 million fund supported by the President and Provost for what will be called the OBTL/DEC Initiative will be used to inject discovery, innovation and creativity into the heart of CityU by providing schools and departments with resources to combine the new DEC with the existing framework called Outcome-based Teaching and Learning (OBTL). There will also be alignment of the DEC with CityU student surveys of teaching, Teaching Development Grants and Teaching Excellence Awards.

Professor Ellis added that many of the activities, and the mind-set he hoped would characterise CityU over the next few years, were already in evidence on campus. He cited a number of activities from a series of events in April of this year aimed at promoting the DEC, such as student-led/ faculty-inspired inter-disciplinary business ventures, and new phone apps. He also made reference to CityU law students winning international mooting events.

“City U is going to be an extremely exciting place to be over the next few years as we implement the DEC, but we need everyone’s best efforts to do it. We need to call on the genius of this campus to make this work, and I am confident we have the wherewithal to be able to do this,” Professor Ellis said.

Professor Ellis has posted the answers to the questions raised during the lecture at the following link: http://www.cityu.edu.hk/provost/BDEC/building_cityu_dec_qa.htm