More than 800 scholars and researchers discussed phonetic science, law, language and discourse at two international conferences organised by the Department of Chinese, Translation and Linguistics (CTL) of City University of Hong Kong (CityU). 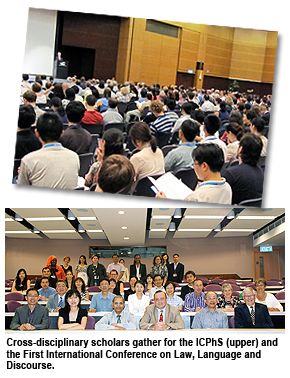 The 17th International Congress of Phonetic Sciences (ICPhS XVII) was held from 17-21 August at the Hong Kong Convention and Exhibition Centre. It was jointly organised by the Institute of Linguistics, Chinese Academy of Social Sciences, Institute of Linguistics Academia Sinica, and CTL. This is the first time the ICPhS has been held in Asia since its launch in Amsterdam in 1932.

Opening speeches were given by Professor Daniel Recasens, President, the Permanent Council for the Organisation of the International Congresses of Phonetic Sciences, and CityU’s representatives Professor Arthur Ellis, Provost, Professor Gregory Raupp, Vice-President (Research and Technology), and Professor Gregory Lee, Dean of the College of Liberal Arts and Social Sciences .

In addition, the First International Conference on Law, Language and Discourse was held at CityU on 20-21 August. International cross-disciplinary researchers discussed topics such as legal language, language rights and policies, and courtroom language under the theme “Multiculturalism, Diversity and Dynamicity”. Professor Lee and Dr Sin King-kui, Acting Head of CTL addressed participants from Australia, France, Japan, UK, US and the mainland at the start of the conference.