A graduate from the School of Creative Media (SCM) at City University of Hong Kong (CityU) has won the 2010 Award for Young Artist.

The music in “Micro Symphony”, for example, is based on digital data converted from the magnified images of plant specimens. “SOUNDgraf” allows the audience to create graffiti through the media of light and sound. He composed the musical work “Rub.ID#food” by scanning the bar codes off food packaging. And the kinetic movements of gold fish were converted into sound and images in “Self-initiated”.

“Full of energy and life, his works have drawn growing attention to the media arts by combining new media with real-life youth activities and performances,” commented the ADC’s panel of judges. 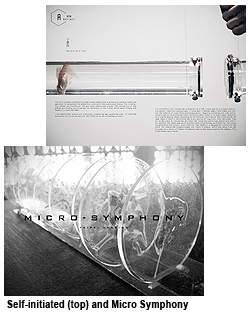 Mr Cheung received the Award for Young Artist in one of the seven categories set by the ADC. He is an ardent music lover, having started to learn the piano in childhood. A graduate of the associate degree in graphic design from the Community College of CityU, he graduated from SCM’s Bachelor of Arts (Hons) in Creative Media programme, majoring in new media and interactivity, in 2009.

“It was a turning point in my life to study at CityU. I had the opportunity to learn about new media and was inspired by CityU’s teachers,” he said. “I like to explore novel things like new media as it can create a deep impression on an audience.”

Mr Cheung said he considers carefully the messages embedded in his work before selecting which media and technology to use.

Mr Cheung’s works are full of musical and philosophical elements. For example, “Self-initiated” was inspired by the Taoism of the philosopher Zhuangzi, in which he tried to view the survival of mankind from both subjective and objective perspectives.

“To enrich my knowledge and creative ideas, I read widely and visit a lot of different exhibitions,” Mr Cheung said.

Delighted to receive the award, he said he was grateful to his mother and the musical group XEX GRP for their support. Founded by Mr Cheung, the band was invited to perform one of their recent compositions at the awards ceremony last month. Mr Cheung said he hoped to exhibit more of his works overseas, too.

Although a relatively young artist in new media art, Mr Cheung has won numerous prizes, including a special mention award from the Hong Kong Designers Association in 2007 and in the interactive media category at the 13th and 15th Hong Kong Independent Short Film and Video Awards. He took home the Young Design Talent Award in 2009 and was selected by Designnet, a Korean magazine, as one of 36 Asian designers to watch.

He also writes music for advertisements and films. His music pieces were screened at the Hong Kong International Film Festival from 2006 to 2009. He formed the duo VIM/Volt-in-Music, an electronic band that won the championship and the best live musical instrument performance award at the Tom Lee Interzone-Creativity in Digital Music Awards 2008.

The Hong Kong Arts Development Awards is organized by the ADC, aiming to give recognition to distinguished arts practitioners and organisations.